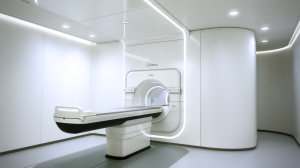 The combination permits clinicians “to visualize tumors at any time and adapt the treatment accordingly,” the company said in a statement.

The Unity won't be available for sale in Europe until it gets its CE Mark, which is expected to happen later this year. Once that is achieved, a global rollout is set to follow.

“Elekta Unity is a technical tour de force, through which we have overcome the long-standing limitations of operating a radiation delivery system within the high magnetic field of a diagnostic-quality MR imaging system,” Dr. Richard Hausmann, Elekta’s president and CEO, stated.

He called the device's development a “a testament to the expertise and perseverance of the members of the MR-linac Consortium,” and expressed his gratitude to all those involved in developing the Unity.

“We started the development of an integrated MR-linac system 18 years ago; the presentation of the clinical system is a huge milestone,” added Jan Lagendijk, Ph.D., professor and head of Radiation Oncology, Department of Radiotherapy / Centre for Image Sciences, University Medical Centre Utrecht.

Lagendijk is considered the “conceptual architect and inventor of the MR-linac system,” according to the company.

The system will let practitioners escalate dosages for tumors with “extreme normal tissue sparing,” observed Lagendijk, adding that “it will also enable shorter and more effective treatment regimens, while its ability to perform functional imaging has the potential to perform better dose painting and tumor response assessment.”

Other features of the Unity include a compact, wide-bore (70cm) MR, soft tabletop, non-glare room lighting and a table that has a low load height to facilitate ease of patient entry and exit.

The Unity will impact cancer care in a number of important ways, stated its developers. They stressed that its real-time imaging permits “adaptation of treatment based on the size, shape and location of tumors and nearby healthy tissue”; a reduction of “uncertainties about tumor location, allowing dosing to a smaller volume and sparing healthy tissue from radiation”; improved differentiation between tissue types leading to better soft tissue treatment and functional MR imaging inside a tumor, which “could potentially detect whether a tumor, or a portion of a tumor, is responding to therapy at the earliest stages of treatment.”

Researchers have also suggested that the device “has the potential to support the use of higher doses administered over fewer sessions, enabling shorter and more effective courses of treatment.”