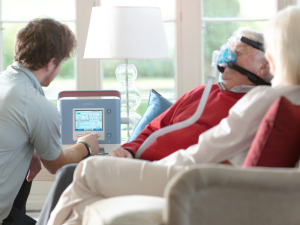 “Patients with severe COPD and persistent hypercapnia have historically had limited therapy options available to them, and outcomes have generally been poor,” Dr. Nicholas Hart, professor and clinical director of Lane Fox Respiratory Service at St. Thomas’ Hospital in London, said in a statement.

The randomized, five-year clinical trial, which was co-sponsored by Royal Philips, included 116 patients who were cared for by respiratory experts at St. Thomas’ Hospital.

The results demonstrated that the addition of home NIV therapy prolonged the median time to readmission or death from 1.4 months to 4.3 months. In addition, the patients’ health-related quality of life was improved within the first six weeks.

“We hope that this will, in turn, allow [COPD patients] to lead healthier and more active lives at home,” said Dr. Teofilo Lee-Chiong Jr., chief medical liaison at Philips. "These findings add considerably to our knowledge of this highly prevalent and debilitating respiratory disorder, and are expected to greatly influence how clinicians care for patients with COPD on long-term oxygen therapy.”

About three million people died of COPD globally in 2015, according to the World Health Organization. The disease is likely to increase in coming years because of a higher prevalence of smokers and an aging population.

Last month, another study sponsored by Philips found that NIV therapy for COPD patients can help payors and hospitals achieve significant cost savings. This study involved a multifaceted care program that included the use of AVAPS-AE, which is a proprietary mode of NIV in Philips’ Trilogy ventilator.

However, a 2014 study published in Thorax, which was designed similarly to the Philips-sponsored trial, found no difference in time to readmission or death within 12 months. The researchers believe this is due to differences in the study population and protocol.

The preliminary results from the new trial were announced in September at the European Respiratory Society’s International Congress in London. The final results were published in the Journal of the American Medical Association after being presented at the American Thoracic Society International Conference in Washington D.C. this weekend.