Hitachi and MD Anderson to weigh proton therapy versus radiotherapy 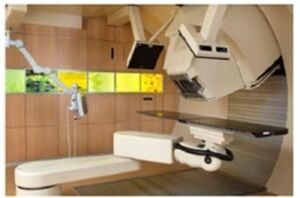 Photo courtesy of Hitachi
Hitachi Healthcare Americas Corporation has entered into a collaboration with The University of Texas MD Anderson Cancer Center to conduct a clinical trial comparing outcomes and side effects of intensity-modulated proton beam therapy (IMPT) versus intensity-modulated photon therapy (IMRT) for the treatment of oropharyngeal cancer of the head and neck.

As many as 10 additional centers may become involved in the study, which will be led by Dr. Steven J. Frank, professor and deputy division head of Radiation Oncology, and Proton Center Medical Director at MD Anderson.

"We are very encouraged by this clinical trial and the support we have received," said Frank. We have treated over 7,500 patients and 2,000 of these patients with IMPT via this long-term collaboration, and this year we commemorated our 11th anniversary of treating patients with proton therapy. We are confident that by working together, we can gain greater insight on the advantages of proton therapy."

Such a trial in radiation oncology is less typical than in therapeutics, according to the statement.

The results of the study will help the company formulate further research and development in proton therapy, which is one of the major thrusts of Hitachi's Social Innovation Business, covering diagnostics, therapy and informatics.

The efforts include ultrasound, MRI systems, and particle beam oncology therapy systems, as well as services utilizing IT.

"We are focused on the long-term future of Hitachi's Healthcare commitment in the Americas and are taking deliberate, strategic actions to improve the company's overall operations while enhancing our competitive position and future growth," senior vice president and general manager of the Healthcare Division, Hitachi America, Yasuhiko Taniguchi said at the time.

Health care is one of the four major efforts within Hitachi's Social Innovation business.

"Integrating our medical imaging operations will allow us to accelerate the design and development of cost-effective health care technology and services offerings, while continuing to provide a superior level of service and support to our customers and partners in the Americas," said Donald Broomfield, president and CEO, Hitachi Medical Systems America.
1(current)
2