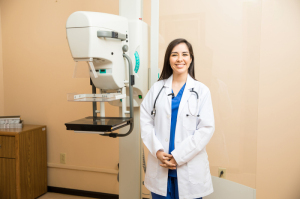 A just-published study of breast cancer data has raised the issue of overdiagnosis from mammography screening – and puts tumor size squarely in the middle of the debate.

That's because many “small breast cancers have an excellent prognosis because they are inherently slow-growing,” according to Yale Cancer Center experts in a June 8th New England Journal of Medicine report, which weighed in on the benefits of breast cancer early detection.

Frequently these smaller tumors come from slow-growing cancers that may not become an issue during a patient's lifetime, they noted.

On the other hand, large tumors that lead to death grow so fast that they are often already intrusive before screening picks them up.

"Our analysis explains both how mammography causes overdiagnosis and also why it is not more effective in improving outcomes for our patients. More importantly, it questions some of our fundamental beliefs about the value of early detection," said Dr. Donald R. Lannin, professor of surgery at Yale School of Medicine and lead author on the paper.

The research team, which also included Dr. Shiyi Wang, assistant professor of epidemiology at Yale School of Public Health, looked at invasive breast cancers found from 2001 and 2013 in the Surveillance, Epidemiology, and End Results (SEER) database.

They found that most overdiagnosis happened in older patients with biologically favorable, slow-growing tumors.

"Until now, we thought that the lead time, or time until a cancer becomes problematic for a patient, for most breast cancers was about three or four years. This paper shows that lead times vary widely depending on the tumor type. A large portion of aggressive cancers have a lead time of two years or less, whereas another large portion of breast cancers grow so slowly that the lead time is 15 to 20 years," Lannin explained.

"It is important that we educate physicians, patients, and the public on the indolent, slow-growing nature of some breast cancers. This knowledge will allow us to individualize treatment options, provide 'personalized medicine,' and avoid the major harms of overdiagnosis, which can result in overtreatment and the anxiety and fear that a cancer diagnosis causes," Lannin said.

But there are those who see the data differently and reach different conclusions about the overdiagnosis issue.

“Aggressive cancers in women in their 40s must be identified early to be effectively treated. Letting these tumors grow even one extra year before screening greatly increases odds that the woman will die from breast cancer. Women 40–49 should be screened regularly,” said Dr. Debra Monticciolo, chair of the American College of Radiology (ACR) Breast Imaging Commission.
1(current)
2