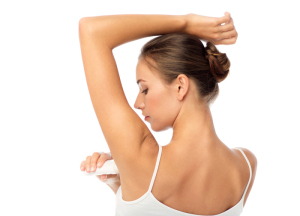 A common doctors’ order to women not to wear deodorant that contains antiperspirant during radiation treatment for breast cancer was not based on any evidence. A recent study just published in Radiology and Oncology dispels the myth.

"Several of my patients expressed dismay at having to avoid antiperspirants during their breast radiation therapy," Dr. Brian Baumann, a radiation oncologist at Penn’s Leonard Davis Institute of Health Economics and lead author told HCB News. He says this was his motivation for conducting the study.

"They shared their stories with me about how having to omit antiperspirants caused social anxiety and discomfort and affected their overall quality of life," he added.

According to Baumann, the longstanding belief was that antiperspirant use during breast radiation therapy might increase the skin dose, exposing the patient to too much radiation. The thinking had been that the overexposure could occur either through a bolus effect or by increased electron scatter caused by the aluminum in the antiperspirants.

According to the study, 82 percent of doctors and nurses in the sample regularly told their patients not to use antiperspirants during radiation treatment. Patients reported receiving such instructions 79 percent of the time.

Baumann said that there is no scientific evidence that the use of such deodorants leads to higher skin effects during radiation therapy. The researchers found no difference in surface dose with and without antiperspirants, using 6 MV at various gantry angles.

"I thought that there might be a difference in the surface dose of radiation for the extra-strength antiperspirant, but there was not," Baumann said. "I was not surprised by the results of the patient and provider survey showing that the recommendation to avoid antiperspirants is still very popular.

The findings are being received well by clinicians. He said that most physicians and nurses have long questioned whether there was validity in recommending that patients not use antiperspirants during breast radiation. But, he explained, they were hesitant to change their practice out of concern that they might harm patients if the antiperspirants worsened the skin toxicity.

The said patients have welcomed the news, as well. Many patients, he noted, are relieved that they can continue their normal routine regarding antiperspirants.

"I think that this study provides yet more evidence that antiperspirant use during breast radiation therapy is safe," said Baumann.