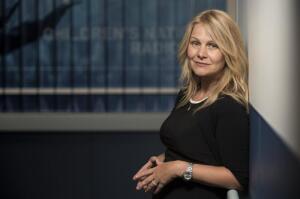 Catherine Limperopoulos
Placenta abruption linked to preterm delivery occurs in 6.5 of every 1,000 births and correlates strongly with perinatal deaths.

Until recently, there was no reliable test to determine if a pregnant woman was at risk for the condition. But a team at Children's National Health System think they have discovered a machine-learning, 3-D MR solution to the problem that may eventually yield novel early biomarkers of placental failure.

The study results were just published in the most recent issue of the Journal of Magnetic Resonance Imaging.

"To date, no study has proposed a framework (or platform) such as the one we describe in the current study that utilizes a multi-dimensional MR texture-based approach to measure placental shape and textural features, and evaluate that framework's ability to predict placental maturity reliably, identify fetal growth restriction in utero and predict postnatal birth weight ," she explained.

The Children's research team acquired 124 3-D MR fetal scans from 80 pregnancies beginning at the 18th gestational week and continuing through the 39th gestational week. Forty-six women had normal pregnancies and healthy fetuses while 34 women's pregnancies were complicated by fetal growth restriction (FGR), defined by estimated fetal weight that fell below the 10th percentile for gestational age.

The 3-D MR scans characterized placentas by shape, volume, morphometry, and texture. A machine-learning-based framework distinguished healthy pregnancies from FGR pregnancies with 86 percent accuracy and 87 percent specificity. And it estimated the birth weight in both healthy and high-risk fetuses throughout the second half of gestation reasonably well.

"Currently, a major obstacle to identifying placental dysfunction is the lack of early in vivo biomarkers of imminent placental failure," said Limperopoulos. "This problem is further compounded by the glaring void in diagnostic techniques for truly informed and effective fetal-placental monitoring."

She added that current techniques, such as ultrasound, Doppler, and biophysical profile, cannot provide direct measures of placental (and fetal) well-being. At best, she noted, these techniques provide surrogate measures that lack sensitivity and specificity.

"The recent successful application of medical AI holds the promise of supporting the development of novel biomarkers to identify high-risk pregnancies," said Limperopoulos.