Rethinking CT in the value-based era 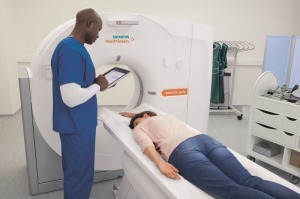 When spectral CT was first introduced roughly a decade ago, adoption was slow. However, it’s recently been gaining steam and even landed a spot in ECRI Institute’s 2016 Top 10 Hospital C-Suite Watch List.

"The real advantage of spectral CT is that it gives you an extra dimension of information so you can start looking at what chemicals and elements are within the anatomy,” says Jason Launders, director of operations in the Health Device Group at ECRI.

One downside of this technology is its high price tag. According to ECRI, a spectral CT scanner costs between $1.6 million and $2.2 million, and that doesn’t include the ongoing maintenance expenses.

In addition, several challenges stand in the way of widespread adoption. Reimbursement is not provided for spectral CT and the technology's workflow is not efficient.

In order for radiologists to evaluate these new types of images, they have to do extra work. They only have a few minutes to read each study, and if it’s going to take longer than that, then they’re not going to do it.

These scanners are costly because they are equipped with advanced dose-reduction features and the latest image reconstruction and display tools. They also have a fast gantry rotation and are capable of large volumetric imaging.

"I think we are in the early days with this [technology]," says Launders. "Manufacturers are beginning to put tools in the hands of radiologists so they can do more of this image manipulation in a way that suits their workflow. The key word here is convenience."

A new generation of spectral CT systems
In August 2016, Siemens Healthineers scored FDA clearance for its SOMATOM Drive spectral CT system. While the previous generation, SOMATOM Force, had a price tag making it suitable primarily for academic centers, the Drive was designed for facilities with smaller budgets.

“The Drive takes the technical and clinical benefits of the Force and brings them into a platform that is more accessible from a cost of ownership standpoint,” says Matthew Dedman, CT marketing director for Siemens.

It can be used for a wide range of clinical applications including pediatrics, cardiology, oncology and emergency medicine. It’s also equipped with the company’s Straton MX Sigma X-ray tubes and Sigma generators, which allow for more targeted beam focusing.

GE Healthcare announced in February that it received FDA clearance for its GSI Xtream technology for its Revolution CT. According to the company, it’s the first volume spectral CT technology designed to improve small lesion detection, tissue characterization and metal artifact reduction with a simplified workflow.
1(current)
2
3
4
5
6