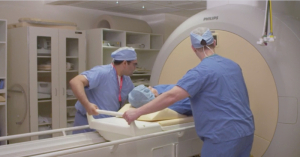 Children’s National is the first children’s hospital in the U.S. to perform magnetic resonance-guided high-intensity focused ultrasound (MR-HIFU) as a noninvasive alternative for treating osteoid osteoma, compared to the standard practice of radiofrequency ablation and surgery. The findings of its physicians were published in The Journal of Pediatrics.

“MR-guided HIFU is different from other techniques in that it is completely noninvasive. There is no requirement for any sort of incision … in radiofrequency ablation, a bone drill is used to find the osteoid osteoma under CT guidance,” said Dr. Karun Sharma, director of Interventional Radiology at Children's National and principal investigator for the osteoid osteoma trial. “MR-HIFU is done with MR guidance, and there’s no ionizing radiation exposure with MR.”

The use of MR-HIFU is part of the Image-Guided Noninvasive Therapeutic Energy (IGNITE) program, a collaboration between Sheikh Zayed Institute and the departments of Radiology, Oncology, Surgery, and Anesthesiology at Children's National that aims to develop technology for minimally invasive and noninvasive surgery and combination therapy approaches that improve quality of life and outcome for pediatric patients.

MR-HIFU uses focused sound wave energy to heat up and destroy tumors under the guidance of MR. This reduces risks of infection and bone fracture. It is also faster, compared to CT-guided RFA and other methods, with an estimated completion time of 90 minutes or less.

“It is noninvasive, so there is much less collateral damage than surgery, for instance, where you’re not disrupting surrounding, normal tissue,” said Sharma. “It’s precise in that way. The other thing is we’re more sensitive about exposing children to ionizing radiation.”

MR-HIFU is authorized to treat uterine fibroids, prostate cancer, essential tremor and bone metastases of several types of cancers in adults. There is hope that the technology will one day expand into treatment for brain conditions, such as epilepsy and seizures.

Sharma says that such technology has the potential to become “commonplace”, and perhaps a standard tool one day for adults and children.

“I think there is a lot of potential for this technology in pediatrics … we’re still early in the game, and we have to do the clinical trials, but for certain applications, it holds a lot of promise,” he said.

Children's National is currently studying the technique in two other pediatric clinical trials, for desmoid tumors and sarcoma.