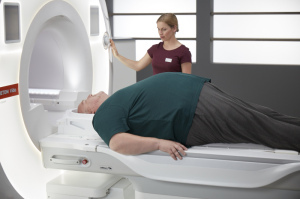 It’s no secret that health care organizations are under pressure to do more with less.

When new MR systems appear on the market that can dramatically reduce scan time – providers notice.

Compared to other systems on the market that can take twice as long, this scanner creates new opportunities for Winkler and his colleagues to improve patient throughput or spend time on other important tasks. 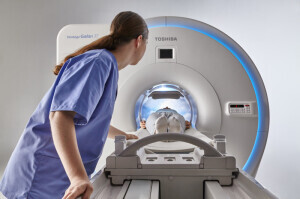 He uses the scanner for typical neurology and musculoskeletal exams, as well as basic to advanced body oncology work. It’s also his go-to system for advanced applications like cerebrospinal fluid flow studies and brain/body spectroscopy.

“One of the problems with 3T is that the advanced applications for sequences can get very noisy,” says Winkler. The Vantage Galan 3T utilizes Toshiba’s Pianissimo Zen technology to reduce that noise and, as a result, cause less anxiety and claustrophobia for the person inside the magnet.

“Patients are often sick, uncomfortable, or anxious for answers — it’s not fun to be in the scanner,” says Eric Stahre, president and CEO of MR at GE. “You want to get in and get out. With an acquisition that’s eight times faster, that benefits everybody: less movement from the patient and improved productivity on the scanner.”

The SIGNA Premier, which can perform routine brain exams in less than five minutes, was the product of a four-year partnership GE had with the National Football League and research institutions. The goal was to design new imaging tools for detecting biomarkers that could potentially diagnose mild traumatic brain injury.

The system uses HyperSense technology, which is part of GE’s HyperWorks application suite, and also boasts high-performance, SuperG gradients that can switch faster than previous systems and have higher strength – all factors that contribute to the speedy scan time.
1(current)
2
3
4
5
6