When doctor becomes patient: A conversation with Lucy Kalanithi and Heather Wakelee at ASTRO 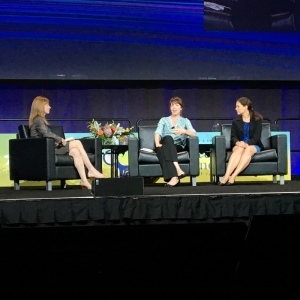 In early 2013, with just a year left in his neurosurgery residency at Stanford University, Dr. Paul Kalanithi was diagnosed with Stage IV lung cancer. For Paul and his wife, Lucy Kalanithi, a Stanford internist, it was a tragic turning of the tables, which he recounted in his best-selling, posthumously-published book, When Breath Becomes Air.

During a keynote Tuesday at the ASTRO 2017 annual meeting in San Diego, Lucy Kalanithi and Dr. Heather Wakelee, Paul’s oncologist at Stanford, had a conversation about his shift from doctor to patient and the strange dynamic created by treating a colleague.

Kalanithi said Paul’s illness showed her how much of people’s identities are tied up in their “imagined futures.”

“Whether it’s raising a child or being a physician, or whatever it may be, our future selves sort of reflect back onto who we perceive ourselves to be now,” she told the rapt audience. “To have that just explode when you’re 36 is very disorienting. There was this whole reshaping of who Paul was and what his days would days look like and that ended up being the stuff of our conversations with Heather. Obviously (we talked about) the details of his therapies, but even things like tailoring his chemo so he could continue being a neurosurgeon … and then this uncertainty came about 'maybe he has longer than that,' and what do you do with that? Just being on the other side is so striking in all these ways.”

The discussion also focused on how different Wakelee’s interaction with Paul and Lucy were because they were also doctors. Wakelee noted that she didn’t have to go into too much detail about his illness and what to expect from treatment.

“There’s a lot of discussion that you don’t have to have because they already know it,” Wakelee said. “I could really focus more on the philosophy of what does this mean to be facing this.”

“Many patients who come to me, if they’ve ever been told a number, that’s all they remember, and it’s a painful memory,” Wakelee said. “‘They say, ‘The doctor said I only had six months,’ and it takes away some of their meaning in life because that’s all they’re focusing on… We can really be doing a disservice if we’re too precise.”

Touching on the philosophy of treating the whole patient, Kalanithi noted how Paul was eager to have a closer relationship with Wakelee and wanted her to get to know him as a person.

“That was almost surprising to see just because he went through years of seeming so independent,” Kalanithi said.

After Paul’s diagnosis, the Kalanithis decided to have a child, and Lucy gave birth to the couple’s daughter, Cady, eight months before Paul died in March 2015. During the discussion, Lucy compared the decision to going into medicine and being confronted daily with the reality of death. She was worried that having an infant to care for while Paul was sick would be exhausting for both of them, but also feared that having to say goodbye to his daughter would make dying more painful for him.

“He said this wonderful thing: ‘Wouldn’t it be great if it did?’” she recalled. “I think about that acceptance of what it means to have meaning in your life, that you enter into things knowing that you will have these extremes of joy and pain at the same time, and he decided to take that on. I think entering the medical field, we all did that.”