A clinical look at the Varian Halcyon during ASTRO 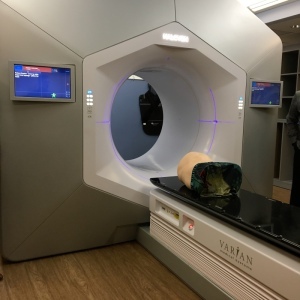 Varian’s Halcyon image-guided volumetric intensity-modulated radiotherapy (IMRT) system was released with plenty of fanfare at the 59th American Society for Radiation Oncology (ASTRO) meeting, with Queen’s “We Will Rock You” playing for the big reveal on the show floor.

But the real magic was on display a day later at Moores Cancer Center on the UC San Diego campus, about 20 miles north of the San Diego Convention Center in La Jolla, where a group of radiation oncologists toured the facility and got to see the Halcyon in action.

The center had just used the system, which received FDA clearance in June, to treat its first patient the Friday before ASTRO.

Varian officials say Halcyon’s innovative beam shaping system allows clinicians to modulate the radiation beam to the tumor, with a platform that is twice as fast as other radiotherapy systems, taking as little as 13 minutes for the entire treatment, and with only nine steps instead of the 30-plus that are required when using other systems.

After taking a look at the machine, which features a couch-mounted camera atop a leaded glass pole, so the therapist can easily observe the patient, those on the tour get to see treatment in action, on a phantom torso.

Ross Hannibal, a Varian engineer and part of the Halcyon development team, spoke about the years-long project that took him around the world to cancer centers as far away as China, India and South America.

“We really tried to understand what the needs are,” Hannibal told the group on the tour, noting that he saw clinics around the world operating 24/7. “You really can't innovate unless you go out and talk to customers.”

Hannibal said that Varian, based in Palo Alto, California, looked to another Silicon Valley company — Tesla Motors — for some design inspiration. The machine is also virtually silent and water cooled, with no chiller necessary. The Halcyon is also self-shielded, requiring a third of the wall thickness to protect the surrounding area from radiation, and requires half the power of conventional linear accelerators.

Dr. Arno Mundt, professor and chair of the Department of Radiation Medicine and Applied Sciences at UC San Diego Health, said he appreciates that the system can also be used on a wide variety of cases and cancers.

“It’s very generalizable,” Mundt told HCB News. “We have lots of applications. That’s where machinery has to go in the future. It can’t be a one trick pony.”

The speed of the Halcyon is also beneficial for both the patient and clinicians, and can also lead to more precise treatment.

“The less time on the machine, there’s less movement of the patient,” Mundt said. “Time is a fabulous thing for comfort, but also for accuracy.”