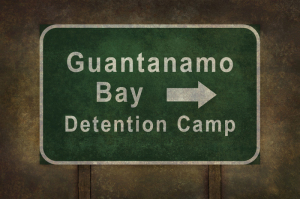 The long and twisting path for a portable MR scanner to arrive at Guantanamo is nearing its end, according to a Pentagon announcement.

“The Office of the Convening Authority has procured an MRI scanner on a temporary basis for utilization at the Naval Station Guantanamo Bay to comply with the Order in U.S. v. al Nashiri," Gary D. Brown, the chief of staff of the Office of Military Commissions, informed defense counsel September 27 – thus responding to the Guantanamo war court judge's order for a brain scan from two years ago in the case of alleged terrorist mastermind Saudi Abd al Rahim al Nashiri, who is set to get a trial that could result in the death penalty.

The scan is a prerequisite of the man charged with leading the al-Qaeda suicide bombing of the USS Cole that slaughtered 17 U.S. sailors and hurt dozens more in 2000.

Defense lawyers have suggested that demonstrable brain damage in Nashiri might halt the case as a capital one. The prisoner was held by the CIA from 2002-2006 during which time he was waterboarded, kept in a box the size of a coffin, faced with fake executions and rectal rehydration among other interrogation methods.

The judge, Air Force, Col. Vance Spath, asked for the scan in 2015, but it could not be done as the previously ordered MR mobile scanner that was slated for Guantanamo was deployed to a Georgia base instead.

According to the memorandum, the machine will be on the island and available to the defense for about four months – from mid-October, 2017, through mid-February, 2018. At that point it will be sent back to the U.S.

The machine is estimated to ultimately cost the military about $370,000, including shipping and operation, Pentagon spokesman Air Force Maj. Ben Sakrisson says, according to the Herald.

“It is unknown at this time whether other individuals will utilize the MRI at other periods of time,” Sakrisson said, according to the paper.

The Siemans 1.5T, $1.65 million portable MR machine, bought by the base in 2012 and slated for a January 2013 delivery to Florida, ended up stored for a year and then shipped to the Dwight D. Eisenhower Army Medical Center at Fort Gordon in Augusta, Georgia, after the military decided that it was unnecessary at the terrorist detention facility.