MR detects neurological impairments in newborns with CHD before surgery 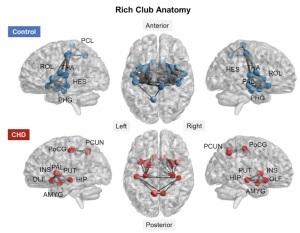 Researchers at Children’s National Health System have found for the first time reduced functional connectivity between specific areas of the brain in babies born with CHD before cardiac surgery was even performed. Their findings were revealed through the use of resting state functional connectivity magnetic resonance imaging (rs-fcMR).

“When you scan your brain in a conventional scan, it’s a static picture,” Josepheen De Asis-Cruz, a research post-doctoral fellow in the Developing Brain Research Laboratory at Children's National and the lead author of the study, told HCB News. “For these babies, what we’re doing is resting state functional connectivity MR. The difference is that instead of one picture, we’re getting a video. We’re getting a series of images. Instead of taking a snapshot of the brain, it’s a continuous set of images that allows you to determine how different regions of the brain are associated with each other."

Conventional MR produces a static picture for assessing the structure of the brain while rs-fcMR creates a video depicting a series of continuous images that provide insight into the development of brain function, with information obtained from characterizing irregular rising and falling blood oxygen level-dependent signals from different regions of the brain.

For their study, researchers compared whole brain functional connectivity in 82 healthy, full-term newborns and 30 who suffered from CHD before undergoing corrective heart surgery. Conventional imaging showed no signs of brain injury in both groups but rs-fcMR results reported lower weights and reduced APGAR scores one and five minutes following birth for babies with CHD.

Subjects with the condition were found to have intact global network topologies. Closer studies of specific brain regions found functional disturbances in a subnetwork of nodes, particularly ones involving the subcortical regions. Weaker functional connectivity between right and left thalamus and between right thalamus and the left supplementary motor area were also noticed.

More than 50 percent of newborns with CHD experience neurological damage in the form of motor problems, cognitive problems and social behavioral difficulties that manifest years after their birth.

Catherine Limperopoulos, the director of the Developing Brain Research Laboratory at Children’s National and the senior author of the study, says the use of rs-fcMR will provide physicians with the ability to identify signs of neurological impairments years before they develop.

“It’s hard to say exactly what effects impaired functional connectivity will have,” she told HCB News. “We postulate, however, that our ability to now be able to pick up disturbances in the emerging functional connectivity of the brain in newborns with congenital heart disease will allow us to be able to identify early biomarkers for long-term neurodevelopmental disabilities that will take years to manifest.”

The study was published in NeuroImage: Clinical.