ProTom to set up three-room proton therapy system in China 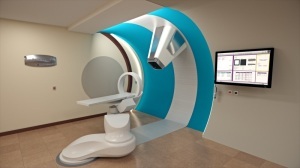 The installation of the Radiance 330 Proton Therapy System three-room configuration marks ProTom’s first international venture, as well as its entry into the Chinese market, with the system set to make up the first proton therapy center in the Hainan province of China.

Though the largest market in the world, China is lacking in proton therapy systems, with only one up and running and another under construction in the entire country, according to Spotts.

The three room configuration will consist of two gantry-rooms and one fixed-beam room in which the system will be exercised on patients, using Fidelity Beam Scanning technology to administer Vanguard proton therapy treatment. The treatment will have the precision of pencil-beam scanning and the power of integrated imaging.

Radiance 330 offers the smallest synchrotron footprint on the market, making it customizable and fully adaptable. The design of the synchrotron enables it to produce fewer neutrons and run more smoothly by generating less heat and electricity.

It also has a high efficiency rate for the percentage of protons generated in its accelerator for delivery to patients, making it cleaner and requiring only a little more than five and a half feet of high density concrete in the bunker for radiation shielding, compared to most competitors, which require ten to fourteen feet. This allows its footprint to remain small while saving in costs.

Other companies have also received offers to set up proton therapy centers throughout China, including Varian Medical Systems which announced its intention last July to install the first government-owned center, which is set to open at the end of 2018 in Hefei, Anhui Province, China. RayStation will also be installing a treatment planning system for such a center in Zhuozhou, Northern China.

Spotts says the introduction of this technology in China will greatly assist in meeting the needs of cancer patients, as well as promote the market value of ProTom.

“As a U.S. corporation, one of the metrics of the corporation is scale,” he said. “So, adding scale to our sales portfolio and having additional sites, including venturing into the international market, will definitely increase the value of the company.”

Radiance 330 is FDA-approved with its flagship system undergoing final testing at Massachusetts General Hospital in Boston.

It is currently in the process of obtaining CFDA approval, with ProTom expecting building of the system to begin in early 2018. The proton therapy center is scheduled to open in late 2019.