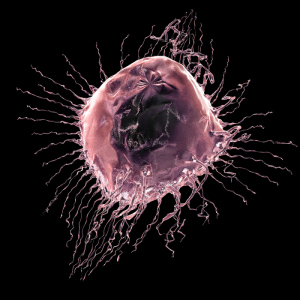 The University of Virginia Health System
is conducting the first clinical trial
that combines focused ultrasound and
immunotherapy
A first-of-its-kind trial seeks to combine two forms of therapy for the treatment of stage IV breast cancer.

Researchers at the University of Virginia (UVA) Health System are conducting a clinical trial that combines noninvasive focused ultrasound technology through the use of Theraclion’s Echopulse system with an immunotherapy medication, pembrolizumab.

“The idea behind focused ultrasound is that it’s a way to do surgery without incisions,” Patrick Dillon, associate professor of hematology and oncology at UVA, told HCB News. “In this case, it has been shown to exhibit a degree of immune recognition of tumors. The pembrolizumab is a PD-1 inhibiting antibody, which essentially means that it kind of takes the brakes off the immune system, thereby allowing for greater immune recognition of disease cells or cancer cells in this case.”

The immune system does not recognize most breast cancers as foreign cells, and therefore, does not trigger immune responses to combat them. Immunotherapy has also historically been more successful in treating other forms of cancer, compared to breast.

The aim of the trial is to observe if the combined use of focused ultrasound and pembrolizumab will enhance the ability of the immune system to recognize tumors in fifteen women participants who have been randomized to receive the medication before or following focused ultrasound treatment. Using an ultrasound probe of the Echopulse system, researchers will apply thermal energy to a target, physically heat up, and destroy up to fifty percent of the tumor.

The idea, according to Dillon, is that the ultrasound will expose some of the protein antigens to the dendritic cells of the immune system, triggering an immune response from the tumor at the same time that the tumor cells are destroyed. The addition of the pembrolizumab will allow the ultrasound to enhance immune recognition of the tumor locally in the breast and more importantly, of cancer cells in the rest of the body.

Dillon says that though it is too early to predict the results of the trial, he is optimistic in the insight it will provide on the immunological treatment of breast cancer.

“I expect that we would see at least additive if not synergistic response to this combination therapy,” he said. That’s our primary endpoint, to look specifically at the types of T cells infiltrating in the tumor. We’re looking to see if we are augmenting the T cell response, the immune response in the tumor site.”

Theraclion recently chose EDAP TMS SA to distribute the Echopulse system, which is CE-marked for treating breast fibroadenomas, thyroid nodules and other conditions, throughout France.

The system is not yet FDA approved. Pembrolizumab is not either, and is considered investigational for the purpose of the study.

The trial is currently underway and is funded, in part, by the Focused Ultrasound Foundation and the Commonwealth of Virginia. Researchers are currently looking for enrollees for the next year.