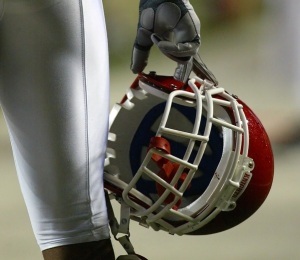 A study presented last week at RSNA 2017 — just down the road from the Chicago Bears NFL stadium — found that former professional football players are likely to have enlarged aortas, the body’s main artery that passes over the heart from the left ventricle.

A study of CT scans found that nearly one-third of NFL players had enlarged aortas, compared to 8.6 percent of non-football players. Enlargement of the ascending aorta can increase the chances of a life-threatening aneurysm.

“Our results are consistent with prior studies, which demonstrate a larger size of the aorta among elite athletes,” study author Dr. Christopher Maroules, formerly of the University of Texas Southwestern Medical Center in Dallas and current chief of cardiothoracic imaging at the Naval Medical Center in Portsmouth, Virginia told HCB News. “However, our study was the first to demonstrate this effect among a cohort of retired athletes, several years following active participation in sports.”

Maroules conducted the study in conjunction with principle investigator Dermot Phelan, a cardiologist from the Cleveland Clinic Foundation, who specializes in sports medicine. They concluded that the results suggest the effect of sports training during early adulthood may have a lasting impact on the aorta.

They obtained imaging data using cardiac gated non-contrast CT, a technique that allowed them to "freeze" the motion of the heart by synchronizing the CT to the electrocardiogram. Coronary artery calcium scores, a measure of plaque, were also applied. Even after adjusting for age, body mass and cardiac risk factors, former NFL players were twice as likely as the control group to have an enlarged aorta.

But, Maroules advised caution in interpreting their findings.

“Our study was small, and it remains uncertain whether or not elite athletes are at a higher risk for adverse outcomes later in life, such as aortic rupture or aortic dissection (a tearing of the inner wall),” he said. “This will need to be ironed out with larger studies that monitor athletes over time."

He also said that there are currently no data to suggest that youthful participation in American football, or any other sport for that matter, contributes to a higher risk of adverse health events later in life.