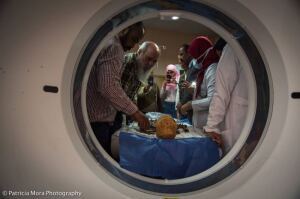 The discoveries were made while conducting CT scans on the corpses, confirming not only the existence of such diseases in ancient times but also providing insight on the care available then.

“We can affirm that both cases had no treatment and followed an evolution of the disease until death,” Prof. Miguel Cecilio Botella López of the department of legal medicine, toxicology and physical anthropology at the Universidad de Granada (UGR) and the leader of the UGR anthropology group involved in the research, told HCB News. “Very likely they would have some treatment against pain since opiates already existed and opium poppy heads were found in some Egyptian tombs, but there was no specific treatment for either. Both reached their terminal phase with a very intense physical deterioration, which indicates the presence of an advanced society that invested economic and human resources in their care until death.”

A 124-slice, next generation CT scanner was utilized in this project as CT is more precise in retrieving information about the insides of mummies and capturing minute details about dressing and embalming techniques. Traditional methods by comparison can invariably lead to significant loss due to mummy wrapping, as well as partial destruction of the wrapping and body itself.

Researchers determined that the mummy with breast cancer, a woman, died around 2000 BC while the other, a man with multiple myeloma, died around 1800 BC with both belonging to either the ruling or at least wealthy classes of the governing Egyptian families of Elephantine.

Lesions observed were identical to existing ones today but higher in number with the woman covered from head to toe in metastases. Tumors were especially numerous in the thoracic area and even found in the phalanges in a lithic state, making the bone look as though it were devoured by moths.

Vertebral fusions, consolidated fractures and a very large loss of bone trabeculae were found in the man, a consequence of bone decalcification.

CT scans were also performed on two additional but fully intact mummies of a young boy and teenage girl from the late period of ancient Egypt (664-332 BC) but found no traces of either disease, with researchers chalking up their causes of deaths to acute infection, the most common way to die then and still now around the world.
1(current)
2