Urologists accused of illegally billing and profiting from IGRT referrals 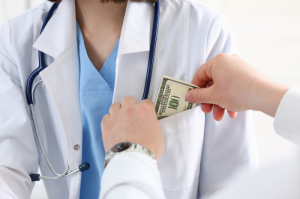 Two urologists are to pay more
than $1 million as settlement over
false claims allegations
Two urologists are accused of submitting and inducing submissions of false claims from other professionals in their field to Medicare for image-guided radiation therapy (IGRT), violating both the physician self-referral law (Stark Law) and the Anti-Kickback Statute.

Dr. Aytac Apaydin and Dr. Stephen Worsham of Northern California have agreed to pay $1.085 million as settlement for accusations that the two solicited eight other urologists, deemed the “Lessee Urologists”, to enter into lease agreements that would enable the eight to bill for and collect profits from referring patients for IGRT procedures to Advance Radiation Oncology Center (AROC), a now dissolved company owned by the two in Salinas, California.

“Health care laws prevent health care providers, and physicians in particular, from referring Medicare services in exchange for financial incentives,” Acting Assistant Attorney General Chad A. Readler of the Justice Department’s Civil Division, said in a statement. “The Department of Justice is committed to enforcing those laws and preventing physicians from improperly injecting profit motives into their decisions about patient care.”

The agreements violate the Anti-Kickback Statute, which prohibits physicians from offering, paying, soliciting or receiving remuneration to induce referrals of items or services covered by federal health care programs, including Medicare.

Apaydin and Worsham are also accused of improperly billing Medicare for their own IGRT referrals to AROC from their other operation, Salinas Valley Urology Associates (SVUA), despite the fact that both were separate entities.

The financial arrangements did not comply with exceptions listed under Stark law, which prohibits providers from billing Medicare for certain services referred by physicians who hold financial relationships with the party performing them.

Acting U.S. Attorney Alex G. Tse says the actions of the urologists were deplorable, putting not only patient care at risk but the entire reputation of the medical community as well.

“The United States Attorney’s Office is committed to protecting the residents of the district from unlawful financial schemes that compromise patient care,” he said in a statement. “Patients who use our federal health care programs deserve care that is free from fraud. The few doctors who choose to engage in this type of conduct not only undermine the system, but impugn the many honest and dedicated medical professionals who serve our community.”

The Lessee Urologists have also agreed to a settlement in which they will be required to collectively pay the United States $900,000.

The investigation was carried out under the watch of the Civil Division of the Department of Justice, the U.S. Attorney’s Office for the Northern District of California and the Department of Health and Human Services Office of Inspector General.

The Department of Justice declined to comment, referring HCB News to information in a press release.