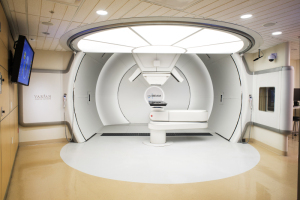 Varian ProBeam Compact single-
room proton therapy system
Cancer solution manufacturer Varian has agreed to supply the equipment for the first proton therapy center slated to open in Alabama, as well as for one set to launch in Florida.

The California-based company will oversee the installation of its Varian ProBeam Compact single-room proton therapy system at the University of Alabama at Birmingham Proton Therapy Center, and the Sylvester Comprehensive Cancer Center at the University of Miami Miller School of Medicine.

“UAB and Miami are going to allow for greater access in the southeast. Miami will have two proton therapy centers just in Miami, and then Delray just up the coast. So you’ll really have three centers in a fairly small area, but with a lot of people,” Bill Hansen, director of proton marketing at Varian, told HCB News. “I think you’re going to continue to see expansion of proton therapy and continued access but now hopefully, a little closer to home for people. They won’t have to travel as far to get proton therapy which is what they’ve had to do over the last ten years.”

Construction of the Alabama site will be overseen by its operator and co-owner Proton International, which chose Varian as the supplier following their initial collaboration to build a single-room system at Delray Medical Center. The University of Miami will also oversee the construction of its own facility.

The ProBeam Compact is made up of a cyclotron, Varian's Dynamic Peak scanning technology for IMPT, a fully rotational gantry, robotic patient positioning tools and a suite of motion management tools.

Hansen says the solution is the ideal system at both facilities for their first venture into the proton therapy industry.

“The single room system is designed for those just getting started in proton therapy. You’re just trying to lower that capital cost upfront,” he said. “You’re trying to introduce your therapy to your organization, to the region, and the single room kind of option allows you to do that. When you get into a multi-room, it’s going to be more expensive. It’s going to be bigger. So you have to have both the land and the capital to be able to do that. Single room systems are also a little easier to finance. They’re easier to get people interested in.”

Construction for the Alabama site is set to begin at the end of January with the facility treating its first patients by early 2020. Installation at the center in Miami will begin in early 2019 with treatment for patients starting in the first half of 2020.