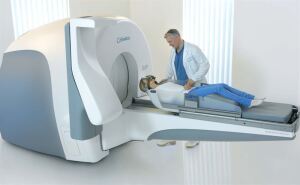 Used for the first time on January 27, 1968 to treat a case of pituitary adenoma in a clinical setting at Sophiahemmet Hospital in Stockholm, the stereotactic radiosurgery tool has gone on to provide therapy to 1.1 million patients worldwide, with 330 units distributed throughout 54 countries, to treat a combined 80,000 new patients annually.

Leksell Gamma Knife is an alternative to conventional brain surgery and whole brain radiation therapy that treats metastatic disease by administering up to thousands of low-intensity radiation beams to one or more targets in single or multiple sessions.

Traditional conditions treated with the Gamma Knife include benign tumors, such as meningiomas and pituitary adenomas; malignant tumors such as gliomas and metastases; vascular disorders including arteriovenous malformations; and functional disorders, such as trigeminal neuralgia.

The solution was devised by Prof. Lars Leksell, the founder of Elekta, with the first system introduced to the U.S. in 1987 at the University of Pittsburgh Medical Center.

Since its creation, the system has experienced five more evolutions over the past 50 years with its sixth generation, Leksell Gamma Knife Icon spreading to many countries and regions since its release, including Japan, Canada and Texas.

Hoglund says that enhanced interoperability and workflows will continue to accelerate the progress of Gamma Knife’s treatment.

“Increased interoperability and automated workflows with decision support will, in the future, enable even more efficient intracranial stereotactic radiosurgery treatments with Icon, allowing the clinician to focus his or her expertise on the patient and the clinical decision,” she said.