North Carolina calls for delivery of medical supplies by drones 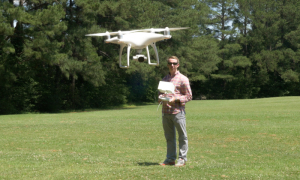 The state government office is seeking to join the Federal Aviation Administration’s (FAA) Drone Integration Pilot Program (IPP) in a move that would enable drones to transport resources, rather than couriers and other manned forms of transportation.

“Using the drone, you would just be able to get these supplies into emergency situations so much faster and save lives,” James Pearce, communications officer for the North Carolina Department of Transportation’s Division of Aviation, told HCB News. “If somebody is in the hospital and they’re dying and they need a blood test to find out what’s wrong with them, instead of waiting for a courier to get there and then drive across town or across the state or however far they need to go to make the delivery to the testing facility, the drone might get there in ten or fifteen minutes. It saves lives in situations like these.”

Supplies, such as blood, are currently delivered to hospitals via courier and cars due to a ban currently in place that prevents people in the U.S. from flying a drone beyond vertical line of sight for safety purposes.

The proposal claims that use of drones would create faster access to necessary resources, such as blood and test results, enabling diagnoses and treatment to take place at a quicker pace.

If approved, the NCDOT would collaborate with global drone technology companies, such as Matternet and Zipline, to establish a network of medical distribution centers that could utilize drones for deliveries.

It also is taking precautions for safety by partnering with businesses, such as AirMap and PrecisionHawk, under the Unmanned Aircraft System (UAS) IPP, a three-year program that collaborates with local, state and tribal governments to safely evaluate innovative, small UAS operations, to create an Unmanned Traffic Management system to track drones that are in the air.

“The technology has advanced to the point where this is possible,” said Pearce. “One of our partners, Zipline, and another, Matternet, have been operating in Africa and Europe, making these kinds of medical deliveries already. We know this technology exists and we decided that it’s the right time to bring it to the United States.”

The proposal was submitted in January and is currently under review. Confirmation of approval or denial by the FAA is expected by May.