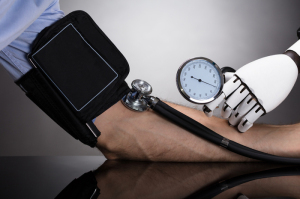 Many patients oppose AI replacing
physicians but are open to AI virtual
nursing assistants
Fewer than 20 percent of patients perceive any value in AI replacing physicians for diagnosis and treatment.

That’s according to a survey released by Syneos Health Communications, which found only 19 percent positive about the idea of an AI symptom checker calibrating diagnoses, and 16 percent about an AI assistant prescribing medications or treatments. In contrast, 64 percent showed comfort in the replacement of human nurses with an AI virtual nursing assistant.

“When you go to a doctor’s office, the nurse is doing the intake evaluation for the visit and then discusses with the doctor your opinion. Then hopefully the patient and the doctor decide together what the best treatment is,” A.J. Triano, senior vice president of engagement strategy at Syneos Health Communications and a contributor to the report, told HCB News. “Patients don’t mind AI doing the legwork of gathering the data and doing the triage process. It’s okay if, even in serving it up, it makes key recommendations to the doctor. The interest for the patient is that on the other end of the process there’s a human being who’s evaluating and making key decisions. The doctor can’t be replaced in that respect.”

Researchers issued the survey to 800 patients in Europe and America suffering from atrial fibrillation, Type 2 diabetes and breast cancer. They also interviewed 200 caregivers for patients with Parkinson’s disease.

Participants indicated a lack of human oversight and the potential for machine errors as the main fears that put them off to the idea of relying on AI as a physician.

In addition to diagnosis and treatment, only 24 percent said they would feel comfortable receiving medical testing or imaging results directly from an AI assistant with no review by a human physician.

Many, however, showed positive interest in AI virtual nurse assistants, perceiving their presence as 24/7 on-demand access for answers and support, as well as general health and wellness monitoring and answers to questions regarding specific prescriptions.

Seventy-two percent indicated that hearing a “realistic voice” with a professional, warm and emphatic tone was more important to them than a knowing a human name, face and gender.

The survey also found that patients were more likely to trust physicians, pharmacists and hospitals as potential providers of AI-powered virtual nurses compared to technology companies and insurers.

Triano says such feedback shows that patients do not want to keep AI out of the diagnosis and treatment process entirely but simply feel more reassured in having a human physician present to best represent their interests during development stages.

“That should serve as a message to any company that is currently not structured to engage a physician actively as a part of the development team or the strategy team for the product,” he said. “They really run the risk of having mistrust in the marketplace. Or to look at it another way, they’ll earn more trust far faster if they can point to the involvement of the physician in the product.”

Human-made errors in medical settings, according to Triano, are responsible for 10 percent of all deaths in the U.S., a fact that he says could shift opinion.

“If they were maybe asked to rank those two things after experiencing some initial exposure to AI in health care and triage settings, we would likely see a different response, maybe a higher comfort level.”