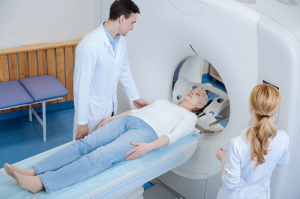 A research team composed of clinicians from three academic imaging centers set out to test a hypothesis: could efforts to reduce MR procedural stresses lead to reductions in costly scanning complications like incomplete exams, disruptive motion, delays, and no-shows?

The results of their research, published in the recent issue of the Journal of the American College of Radiology, have yielded a resounding "yes."

“In medical settings, pain and anxiety increase over time and are often not effectively treated by drugs,” lead author Dr. Joseph A. Ladapo, associate professor, Division of General Internal Medicine and Health Services Research, David Geffen School of Medicine at UCLA, Los Angeles told HCB News. “We have even come to believe that just lying on a table, such as in MR, or being in a waiting room increases stress over time.”

According to Ladapo, a short interpersonal intervention at the onset through staff rapport, relaxation techniques, and other strategies can reverse the anxiety attributed to MR patient complications. The program developed to achieve this end is Comfort Talk, and was founded by co-study member Dr. Elvira V. Lang, an interventional radiologist and a pioneer in medical hypnalgesics.

A total of two hospital-based and two free-standing imaging sites participated in the study. The research team consisted of members from UCLA, Duke and Ohio State medical schools.

“The theory behind Comfort Talk is that we are wired to assume the worst as a self-preserving mechanism,” Lang told HCBN. “Once a painful stimulus is experienced, all following stimuli will be more likely to be interpreted as painful too, whether they are or not. And in the context of ambiguity, anything will be interpreted by the subconscious as dangerous, e.g., increasing anxiety and/or pain.”

Ladapo said that in addition to offering more patient-centric care, the study is a relevant quality finding under MACRA (Medicare Access and CHIP Reauthorization Act). MACRA redesigns federal physician payments to reward better-quality outcomes in combination with lower costs. He cited Lang’s prior published work in the Lancet related to better coping strategies to reduce anxiety and pain in surgical patients as inspiration for the MR study.

“Despite [the Lancet] findings replicated in different settings and published in prestigious journals, adoption – at least in the U.S. – was slow,” said Ladapo. “In the case of Comfort Talk … you can actually save money while simultaneously improving the patient experience.”