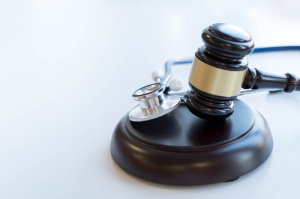 C.R. Bard is to pay $3.6 million
to a woman implanted with a
defective IVC filter it produced
A state district court has ordered C.R. Bard Inc., now a part of Becton, Dickinson (BD), to pay $3.6 million in damages to a woman in Georgia who experienced complications from the implantation of a defective inferior vena cava (IVC) filter produced by the enterprise.

Plaintiff Sherri Booker filed the suit after her G2 IVC filter implant fractured inside her body and perforated her inferior vena cava. The device subsequently broke into two pieces, one of which migrated into her aorta and required open heart surgery for its removal. Surgeons were unable to remove the other piece, which is still embedded in Booker's inferior vena cava.

"She had a device called a G2 IVC filter that was never tested in humans until they put it in the market place. Within two or three months that it was on the market, Bard determined the design of the device was such that it would migrate, tilt, perforate and break," Ramon Rossi Lopez, the co-lead trial counsel and an attorney for law firm, Lopez McHugh LLP, told HCB News. "They kept it on the market for another six years. They knew how to fix it. They just decided not to. They wanted to expand the indications of it to go from a marketable device to a retrievable device."

The G2 IVC filter prevents pulmonary embolisms by intercepting blood clots before they can reach the heart and lungs. Implanted in the inferior vena cava, the FDA recommends its removal within 29 to 54 days following the operation.

Booker, implanted in 2007, claimed to begin experiencing pain after the device fractured, tilted and migrated, penetrating her inferior vena cava.

Though the piece that traveled to her aorta was removed in 2014 during an open heart surgery procedure, the other is still stuck inside her with surgeons unsure if it will stay in place or move toward her heart. Booker, as a result, now makes sure she is 20-30 minutes from a hospital wherever she goes.

Bard denies any wrongdoing, saying that the blame rests with the surgeon.

The jury who tried the case found Bard to be guilty of failure to warn and conscience disregard with respect to potential consequences by withholding information, holding the enterprise 80 percent responsible for the patient’s suffering and ordering it to pay $1.6 million in actual damages.

A second hearing on punitive damages immediately followed with the jury awarding the plaintiff an additional $2 million. It also ordered the radiologist to pay $400,000 for failing to report the problems of the device.

Retrievable IVC filters have been associated with more than 900 adverse events, according to the FDA in 2010, including cases involving migrations, fractures and embolizations, and perforations of the inferior vena cava.

Booker's is one of the first in more than 3,500 multi-district ligation trials involving Bard’s IVC filters and the first to go to court in the U.S. District Court, District of Arizona. It also serves as a bellwether or "test" trial, which along with others, will be used to determine the general consensus on such cases, potentially prompting future settlements in such matters.

"If something’s not performing as safely and effectively as you’re representing it in your brochures, sales and marketing and if it’s not performing in a manner in which doctors and patients expect it to be performed due to a design defect that you know needs to be fixed, then you have to stop selling it until you fix it," said Lopez. "That’s the biggest lesson. I don’t know if Bard learned that lesson. I hope so."

Further state and federal IVC filter trials are set to begin in the summer and fall.

BD, which acquired Bard in 2017, did not respond for comment.