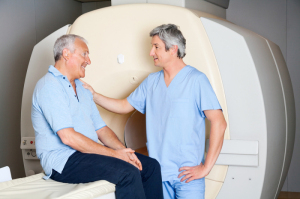 The study, titled RE-IMAGINE, will be the first to evaluate MR as an accurate option for detecting prostate cancer earlier and more reliably in population screenings, and will test its combination with emerging techniques such as machine learning and genomics as potential replacements to biopsies.

"MR will give us volume location and probability," Mark Emberton, a professor of interventional oncology at University College London who will be leading the study, told HCB News. "One could match this morphometric information with circulating DNA. We hope that RE-IMAGINE will generate a new risk stratification method. One that may not necessarily include biopsy procured tissue."

Biopsies often cause side effects in patients, including pain, bleeding, urine retention and infections that lead to sepsis. At the same time, current prostate-specific antigen (PSA) tests are unreliable for population screenings with the U.K. reporting a 75 percent rate of false positives and 15 percent of false negatives among men who undergo such exams for prostate cancer.

The study will utilize MR in combination with other high-tech diagnostic tests to determine if such partnerships can better predict disease progression in 1,000 patients with medium to high-risk cancers, as part of an effort to develop better alternatives to biopsies for directing the right patient to the right course of treatment.

Researchers also plan to test its ability to detect prostate abnormalities in 300 men between 60 and 75 who have never undergone a PSA test.

Much of the work behind the study will be based on research conducted and published in The Lancet last year by Emberton and his colleagues, who found that MR scans were capable of ruling out cancer in 27 percent of men who received a positive PSA result.

They also showed that MR could detect 18 percent more cases of serious prostate cancer in men with possible tumors by using scans to guide the biopsy needle to the correct location.

"MR gives us the best resolution of any imaging platform at the prostate level," said Emberton, noting that it is also a cost-effective tool for providers. "We are going to link the imaging phenotype to the underlying genetic and transcriptomic architecture. We are then going to follow the patients for life."

In addition to UCL, MRC has partnered with King’s College London, the Imperial College of London and at least 12 industry partners in this endeavor.

The study is one of four funded by MRC’s Stratified Medicine Initiative in which £16.8 million will go toward the development of new approaches for treating prostate cancer, kidney disease, alcoholic hepatitis and childhood arthritis.