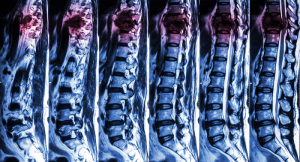 A new study indicates that machine-
learning could indicate the degree of
neurological impairment from acute spinal
cord injury in an MR analysis
Machine learning may soon be a standard component in diagnosing the extent of neurological damage incurred following a spinal cord injury.

That is a possibility explored by researchers from the University of California, San Francisco, in their new study which assessed multiple algorithms in semiautomated MR analysis to classify patients based on their degree of neurological impairment. The results are set to be presented at the ARRS 2018 Annual Meeting.

"MR, with its exquisite soft tissue contrast, makes it the ideal modality for sensitively detecting pathologic changes in the spinal cord following traumatic injury," Jason Talbott, assistant professor of radiology & biomedical Imaging at UCSF and an author of the study, told HCB News. "Further, because of the variety of available MRI sequences we can probe specific subtypes of pathology, such as susceptibility weighted imaging for hemorrhage detection; diffusion imaging and DTI for white matter integrity; or T2 for highly sensitive detection of edema and contusion injury."

The proof-of-principle study found that the applications of five of these machine-learning methods were capable of identifying potential prognostic texture features and classifying degrees of impairment with variable accuracy.

In addition to SCI, machine-learning has also showed possible value in predicting which patients would benefit most from prostate multiparametric MR and which with OCD would respond best to cognitive behavioral therapy based on functional MR scans.

Still, many researchers caution against the notion that AI will replace radiologists and physicians, indicating that it is still in its infancy and requires a human element, as argued by neuroscience researchers in a recent study, which found that while able to decode mental activity, machine learning does not comprehend the specific information processing components of the brain.

"While AI can be very useful, or even essential, in neuroengineering (e.g., for exploiting all possible dimensions of brain activity to interface with machines, such as robotic devices for brain or spinal-injured patients), its use in neuroscience – that is, to understand the principles of brain functioning – is questionable, and requires solid hypotheses and theories to interpret the results," Anne-Lise Giraud, a professor at the University of Geneva and an author of the neuroscience study, told HCB News at the time of the story's release.

Talbott regardless see a great future in the application of AI for diagnosing and determining the best course treatment for SCI.

"My grand vision of precision medicine applied to SCI is that one day, in real time at the PACS station, we will have tools that can reliably auto-segment the spinal cord tissue from the MR image, automatically extract a number of pre-determined high yield imaging features from a patient's image, and cross-reference that patient's data with a large data repository containing thousands of SCI patient clinical and radiologic data," he said. "The output would be highly accurate prognostic data related to precise motor and sensory outcomes. Such early injury stratification and prognostic data is essential not just for informing the patient and their family, but for identifying patients to include in clinical trials, especially those involving experimental therapeutic interventions."

The use of testing sets and the variables involved in each trained model of the UCSF study were recorded for accuracy.