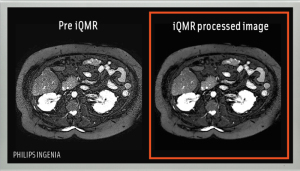 Magnetic resonance (MR) imaging is the dominant method for diagnosis of central nervous system and musculoskeletal system disorders. MR provides more information about tissues such as the brain, joints and other organ systems than other imaging modalities (e.g., computed tomography). However, MR is a somewhat time-consuming technique, and the lengthy scan times are poorly tolerated by patients. Reducing scan time leads to increased efficiency, a minimized need for repeat scans and related costs, and improved patient comfort and satisfaction.

MR scan times range from as little as 15 minutes to as much as 60 minutes, depending on the type of study being performed. Patients need to remain motionless in a closed space, and report discomfort and suffer partly due to the noise generated by the scanner. In 2015, Baran et al. published that 68 percent of MR patients reported a medium or high level of anxiety. Certain populations, such as children and claustrophobic patients, are more prone to motion, and can require sedation to tolerate MR imaging. In general, shorter scans mean better patient experience and less motion artifact. According to a study published in the Journal of the American College of Radiology in July 2015, repeated scans due to patient motion can easily cost a hospital up to $100,000 in lost annual revenue. Reducing scan time improves patient comfort and may avoid a substantial portion of lost income.

With declining reimbursement rates, hospitals and imaging practices have a renewed emphasis on workflow and cost-effectiveness. Scanner productivity and throughput have become increasingly important. Shorter scan times increase the number of potential scans per day and thus reduce the cost per scan. Novel as well as traditional methods for reducing MR scan times have an increasingly essential role in today's clinical practice.

In general, in MR there is an inherent trade-off between scan time and image quality. Image resolution, contrast, signal-to-noise ratio (SNR), and appearance of artifacts, among other characteristics, can be adversely affected when scan time is decreased. A new machine learning-aided iterative image reconstruction technology, iQMR (intelligent Quick MR), developed by Medic Vision Imaging Solutions can allow significant reduction in MR scan times while maintaining image integrity. iQMR is based on Medic Vision's patented volumetric image processing algorithms that dramatically improve SNR and enhance the images. Images from highly accelerated scans are processed by the iQMR software, which deconstructs the entire scan set into 3D blocks ("patches"), extracts their feature sets, and using similarities between the patches and a proprietary statistical model, differentiates between noise and signal. The result is shorter scan times with maintenance of, or even improvement upon, routine image quality. iQMR was cleared by FDA for use in the U.S. market earlier this month.
1(current)
2