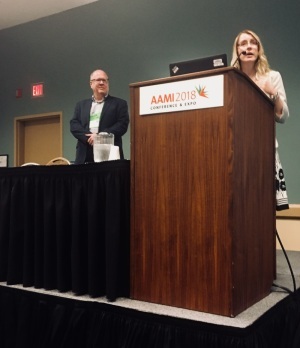 Izabella Gieras and Robert Woods
discuss their approach to minimizing
downtime events at Huntington
Hospital
For Ronald Randle, medical device downtime was a topic of particular interest during his visit to the AAMI 2018 Conference and Expo in Long Beach, California last weekend.

The biomedical surgical manager hoped to take some lessons home to Tulsa, Oklahoma where he works at Saint Francis Health System.

Like any healthcare facility, Randle and his team have had their run-ins with downtime, including an unplanned event just a month ago.

“Our technician was at the hospital for four hours. That was an error on his part. He should have called the vendor immediately. Once he did, it was another four and a half hours before they resolved the problem. I called the vendor for updates and I was communicating out to my director. That’s when it hit me that this is how we should be doing it. She shouldn’t be calling me, saying, ‘Ron, where are we at?’ I should be calling her and communicating with the vendor.”

Randle's story is not unusual. According to a 2014 survey published in the International Journal of Medical Informatics, 70 percent of 50 facilities experienced at least one unplanned downtime greater than eight hours over a three year period, with patients at three or more incurring injuries from either planned or unplanned events.

The onset of downtime is due to a lack of structured processes for communicating when planned or unplanned downtime arises, leading to delays in patient care and losses in revenue for providers.

An AAMI presentation entitled, A Collaborative Approach to Downtime Planning for Medical Device Systems, took aim at mitigating the impact of downtime and responding efficiently to these situations.

Robert Woods, director of information systems and applications and infrastructure at Huntington Hospital, and one of the speakers, stressed that communication goes beyond incorporating members of just an HTM or clinical engineering department. It must include all stakeholders, including IT, hospital administrators, nursing staff and vendors, laying out the roles that each play in detecting and addressing downtime-related problems.

“The best way to communicate is as early as possible,” he said. “The main thing is identifying stakeholders. You want a communication plan that basically mirrors the government structure you have in your organization so you can socialize with nursing and medical leadership. As you step more and more down through that list, you get to the persons at the frontlines.”

Technological advancements have helped get the ball rolling through increasing connectivity between devices, resulting in greater collaboration between clinical engineers and IT personnel for identifying problems and addressing them.
1(current)
2