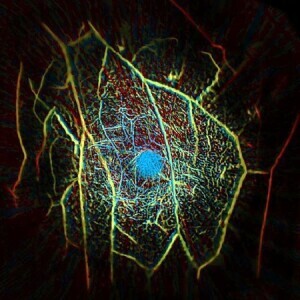 The scanner can produce images of
internal vascular structures of the
breast like this one
Early detection of breast cancer may soon be available to patients – minus the discomfort and radiation exposure found in mammograms.

Researchers at Caltech have developed a laser-sonic scanner that utilizes photoacoustic computed tomography (PACT) to locate tumors in as little as 15 minutes, and are in the midst of commercializing it as a safer, more efficient and more affordable alternative to mammography, breast MR and ultrasound.

“The commercialized photoacoustic imaging systems are expected to be cheaper than a typical MR system because their order of magnitude is about 10 times faster for breast imaging. The cost per patient visit will be far cheaper consequently,” Lihong Wang, Caltech's Bren Professor of Medical Engineering and Electrical Engineering and a developer of the scanner, told HCB News. “Breast ultrasound detects mechanical properties of tissue, which may not provide sufficient contrast for early-stage tumors. Photoacoustic tomography detects optical properties, which are related to molecules, thereby providing functional imaging, which holds promise for early-stage cancer detection.”

Though proven to increase breast cancer survival rates, many women often avoid mammograms due to discomfort from painfully squishing their breasts between plates. Mammograms are also limited in detecting cancer in women with dense breast tissue and are known to overproduce false-positive diagnoses, a phenomenon that affects half of women at some point in their life.

With PACT, a patient lies face down on a table with one breast at a time in a recess containing 512 tiny ultrasonic sensors. A near-infrared laser light pulse from underneath the breast is shot into and diffuses through the tissue where it is absorbed by oxygen-carrying hemoglobin molecules into the patient’s red blood cells.

This produces ultrasonic vibrations in the molecules which are picked up by the sensors to produce an image of internal structures as small as a quarter of a millimeter at a depth of four centimeters.

In addition, the light in its currently used wavelength is absorbed by the hemoglobin at a level that enables the images to depict blood vessels within tissues as they are scanned. This allows clinicians to detect tumor-produced blood vessels which supply it with blood to support its growth. Laser exposure is well within the safety limit.

Researchers tested PACT in a recent pilot study in which it identified eight of nine tumors present in the breasts of eight women scanned.
1(current)
2