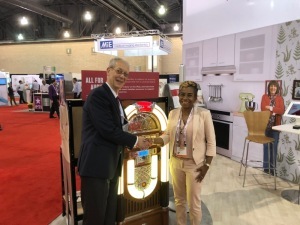 Here is a picture of Donna Manns and I, standing in front of the jukebox by her booth. Donna's company, Astellas, offers a service to coach patients who are prepping for a cardiac stress test. Like so many other people at the conference, Donna was enthusiastic.

In fact, I have always felt that SNMMI is really an upbeat, and enthusiastic show. It seems as though everyone is excited.

It is a long show from 10:00am to 5:00pm, but the exhibit hall seemed to always be packed with people discussing the new technology and a lot of new scientific developments.

Philadelphia was a great venue, and the Convention Center is right next to the Reading Terminal Market so nobody went hungry! I have also added to my collection of SNMMI T-shirts, which is always a conversation starter at my Health Club.

Next year, the show will be in Anaheim, so I will be looking forward to that as well.