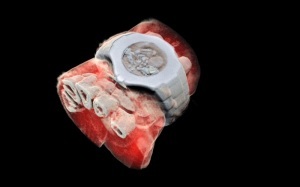 Using CERN technology, researchers have
completed the first 3D color X-ray
scan on a human (Credit:
MARS Bioimaging Ltd)
The first 3D color medical scan of a human being using CERN technology has taken place, opening up access to the evaluation of greater details of the body’s chemical components for diagnosing and treating cancer and other diseases.

Father-son duo Phil and Anthony Butler of New Zealand have spent over a decade developing the MARS spectral X-ray scanner, an advanced form of CT technology designed to measure X-ray spectrums to produce color images instead of black-and-white ones. The senior Butler was the first to undergo a scan with the system imaging his ankle and wrist. It has now been commercialized by MARS Bioimaging Ltd. (MBI).

“While modern 3D imaging technologies of ultrasound, MR, CT and PET improve medical diagnosis steadily year by year, there are still many common and even more less common diseases that cannot be diagnosed,” Phil Butler, a professor and physicist at the University of Canterbury, told HCB News. “For instance, there is no way of determining the progression of carotid artery disease and the likelihood of a stroke, but we have shown MARS can in excised carotid plaques. Existing imaging cannot get good images of bone health around metal implants, but we have shown MARS can.”

Depictions of traditional black-and-white scans are limited to the density and shape of objects.

Its use is backed by early studies which specify that the application of spectral technology in clinical settings leads to more accurate diagnoses and personalizes treatment.

The addition of Medipix3 ASIC enhances spatial resolution to 110 micron pixels and energy resolution to thresholds of eight, greater than those of other ASIC’s on the market.

“We strongly believe that spectral CT can be an alternative to MR and PET. We expect this to be an addition to the existing imaging modalities,” Vivek VS of MARS Bioimaging, told HCB News. “However, this will have significant advantages over the existing imaging modalities. For example, it is impossible to scan a patient with a metal implant or a pacemaker in MR but our technology has the potential to do the job and deliver similar or better results once fully implemented.”

Small versions of the scanner are currently used to house tissue samples at institutes worldwide. A larger version was developed to scan the first human and will be used in a world-first clinical trial to scan orthopaedic and rheumatology patients from Christchurch in the next few months.

Research was supported by the Ministry of Business, Innovation and Employment; GE Healthcare; and the Universities of Otago and Canterbury, both of which are the workplaces of radiologist and professor, Anthony Butler.