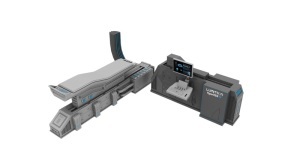 Lumitron's HyperVIEW platform
Following its obtainment of licenses from the Lawrence Livermore National Laboratory, Lumitron Technologies Inc. is set to develop a variety of laser-based, advanced X-ray and gamma ray systems with an image resolution beyond that of a modern-day CT scanner.

Utilizing Lumitron’s HyperVIEW X-ray platform, the scanners are equipped with laser Compton scattering capabilities, making image resolution 100 times better than CT and 1000 times better than traditional X-ray, and designed with a footprint size similar to that of a modern-day CT.

“Existing X-ray systems have made significant advances over the past years with respect to three dimensional imaging capability and functionality. However, the underlying methods are still based on bremsstrahlung X-ray sources, whose output is both broadband in terms of spectrum and limited in resolution,” Prof. Chris Barty of the University of California, Irvine and Lumitron's chief technical officer, told HCB News. “The HyperVIEW imaging sources are based on an entirely different X-ray production method, laser Compton scattering, and as such are capable of producing mono-energetic output and micron-scale resolution.”

Resolution of conventional X-ray systems used in clinical settings are limited to under one millimeter, whereas HyperVIEW technology can image objects up to 1000 times smaller, detecting and analyzing their elemental and isotopic compositions while keeping dose exposure below levels found in current X-ray technologies.

It also can capture motion at the picosecond time scale, enabling it to analyze movements within 1000th of a billionth of a second, which opens up the potential for the creation of a theranostics machine capable of scanning remarkable imaging detail as well as cellular level treatment.

Use of the HyperVIEW system opens up access to a new class of contrast agents and offers clinicians the potential to diagnose and treat a variety of conditions, such as cancer, substantially earlier and more accurately than with current imaging technologies.

“Our expectations are that the applications of the HyperVIEW system will go well beyond imaging and will enable the simultaneous, precision location and treatment of disease without patient movement,” said Barty. For clinicians and patients, we believe this will quite simply change everything.”

Funding for research and development, worth more than $200 million, is provided by the US Department of Energy at Lawrence Livermore National Laboratory and the SLAC National Accelerator Laboratory at Stanford University.

Lumitron is collaborating with leading manufacturers of current generation X-ray systems. It is currently in discussions with leading U.S. brokers and institutions over its target for a NASDAQ IPO.