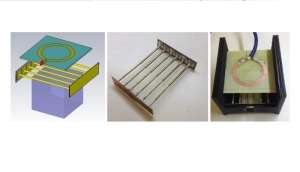 “The primary goal of this work is the demonstration of the superiority of the proposed small-animal coil design for whole-body imaging, which opens new perspectives for preclinical imaging experiments that require high-quality imaging of large anatomical structures,” Mikhail Zubkov, a postdoctoral researcher at ITMO University, told HCB News. “This may improve the sensitivity of other preclinical research if such coils are used, particularly for drug delivery, systemic diseases and other studies on animal models.”

The ITMO coil is adapted specifically for scanning the size of a mouse, enabling it to avoid extra noise in its imagery, and is composed of materials that can be adjusted for various projects. Scientists reduced its size using a metastructure with a disturbed capacity.

Researchers constructed a prototype based on numerical modeling used to optimize its geometry and determine which materials were needed. They then measured the signal-to-noise ratio in different parts of images at different distances between the object and coil, comparing their findings to the mathematical simulation and experimental parameters of standard volume coils. They eventually found an optimal distance in which the coil provides image quality three times higher than a standard one.

The reason is due to the higher alternating magnetic field intensity of the coil, compared to a standard one, providing it with high sensitivity in the entire field of view for improved image quality. It also requires no capacitors due to its self-resonant nature and can be tuned by changing the geometric parameters.

The design optimizes how the coil works as well as its sensitivity level and image quality, while offering faster prototyping and easier production of coils designated for very specific clinical tasks.

In addition, the coil can potentially possess higher lifetime expectancy than standard ones, and decreases scan preparation time due to the absence of wires needed to connect to the coil.

Such features, according to Zubkov, may be found in a variety of coils currently in the works at ITMO for various preclinical studies, including those for human examinations.

“We are looking forward to introducing coils based on similar principles for human MRI. Initially, metamaterial-based coils were designed with clinical MRI in mind,” he said. “Particularly, our group has tested a number of wireless coil designs for human applications and reported them to MRI and the wider scientific community.”

The findings were published in NMR in Biomedicine.