Olympus' ultrasound endoscopes are compatible with ultrasound technology produced by Hitachi which has also established another partnership with scil animal care, a division of Henry Schein Animal Health, expanding the collaboration earlier this month to take control of national coverage and distribution of its ultrasound solutions within the veterinary market.

The distribution of the ARIETTA 850 also comes as the same time as another agreement to distribute FlexDex’s wristed needle-driver, alongside Olympus’ 3D laparoscopic imaging technology, and designed for intuitive control in minimally-invasive procedures across a range of specialties. 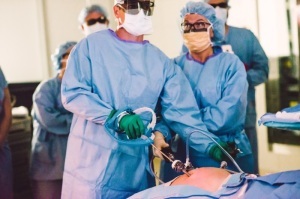 FlexDex's wristed needle-driver
Attaching its three-axis gimbal to the surgeon’s wrist, the solution controls a series of mechanical components that convert the movement of the surgeon’s hand to the tip of the instrument. Its mechanical design is constructed to create movements that act as an end effector inside the patient, corresponding with those of a surgeon’s hand, wrist and arm from outside of the patient.

The use of these intuitive, articulated movements and rotations equips surgeons with the precision and control needed to easily suture hard-to-reach areas of the abdomen, sparing them the costs and constraints of robotic systems while increasing patient satisfaction and quality of life.

“The additional depth perception provided by Olympus' 3D imaging allows for easier angle identification and orientation within the abdomen when using articulating devices such as FlexDex,” Corinne Janetski, director of marketing for Imaging at Olympus, told HCB News. “Gaining the depth perception that is traditionally lost in a 2D environment becomes particularly important when introducing technology like FlexDex, which is used in the more challenging suture-intensive steps of laparoscopic procedures such as ventral hernia repair and hysterectomies.”