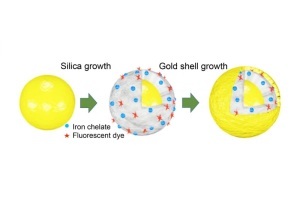 A new contrast agent embedded with
iron is twice as efficient in performance
than gadolinium
Nanoscientists at Rice University and the University of Texas MD Anderson Cancer Center have developed an alternative contrast agent that outperforms gadolinium and may spare patients from its alleged health risks.

Embedding iron chelates inside nanoparticles, researchers created a modified version of concentrated layered nanoparticles known as nanomatryoshkas, combining and applying it with another set of nanoparticles, nanoshells, to produce a twofold improvement in T1 MR contrast performance.

"Putting a magnetic ion inside a larger nanoparticle enhances MR relaxivity by lowering the tumbling frequency of the ion compared to a much smaller molecular chelate. In an individual nanoparticle, you can have more than 100,000 magnetic ions, compared to a single ion in a chelate," Naomi J. Halas, director of the Smalley-Curl Institute and Stanley C. Moore Professor of Electrical and Computer Engineering at Rice University, told HCB News. "Both effects together give a stronger response (T1 relaxivity) than what is found in Gd chelate that is in common use worldwide."

"In the earlier work with gadolinium, we noticed that the nanomatryoshka design enhanced the relaxivity of the embedded gadolinium chelates," Luke Henderson, a Rice graduate student and lead author of the ACS Nano paper, said in a statement. "At the same time, we were hearing more calls from the medical community for alternatives to gadolinium, and we decided to try iron chelates and see if we got the same sort of enhancement."

The use of iron contradicts long-held beliefs that few forms of the element were clinically available as alternatives to gadolinium for T1 tests.

To image the body’s interior, MR scanners will align the nuclei of hydrogen atoms and measure how long it takes for the nuclei to "relax" into their resting state. The ability to relax varies by tissue and is affected by repeated nuclei alignment and measurements of relaxation time. Contrast agents improve this resolution by increasing the relaxation rate.

Using iron, the team boosted relaxation and were able to load about four times more iron into each nanomatryoshka, doubling their performance to that of clinically available gadolinium chelates.

Used in previous trials as well as a current one for prostate cancer, nanomatryoshkas and nanoshells convert otherwise harmless near-infrared light into localized, intense heat to destroy cancer. Though nanomatryoshkas are 20 times smaller than a red blood cell, the addition of fluorescent dye makes them visible during diagnostic scans.
1(current)
2