Proton therapy comes to New York City: behind the scenes at the NYPC 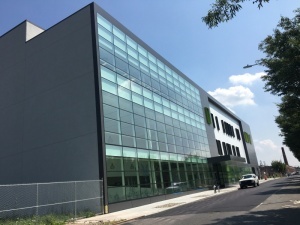 At 10 p.m. on Halloween night in 2017, a 150 foot-long truck inched its way through the dark congested streets of midtown Manhattan. Most of the trick-or-treaters had already gone to bed, but a construction crew was waiting outside 126th St. between 2nd Ave. and 3rd Ave. for a treat of their own: a ProBeam proton therapy system from Varian Medical Systems.

The following morning, the crew pried the large blue cargo box open to reveal a cyclotron, fresh off the boat from Germany. The team fastened the particle accelerator to a crane, which lifted it high into the air before bringing it down through an opening in the roof of an unfinished building.

Fast forward to almost one year later and the cyclotron is fully installed in the now complete, three-story building in Harlem that in the coming months will make its debut as the New York Proton Center, the first proton therapy facility in New York State.

“Our goal is to really serve the greater New York marketplace,” Jonathan Weinbach, chief financial officer of New York Proton Center, told HCB News. “We envision that the majority will come from the New York metro area. We’re going to treat the patients who need proton therapy the most and who get the most from it.”

The opening is planned for sometime in February or March of 2019. Meanwhile, Weinbach and his team continue to work through the last few hurdles in what amounts to a nearly decade-long endeavor.

The idea for the NYPC goes back to 2009. Within a year the Department of Health put out a request for proposal in New York, catching the attention of Mount Sinai Health System, Montefiore Medical Center, and Memorial Sloan Kettering Cancer Center. The three subsequently signed on as partners, bringing with them the financial support, clinical expertise and patient populations that are necessary for a successful proton facility.

But how do you find space for a proton therapy facility in Manhattan?

“You essentially need half a city block,” said Weinbach. “The center is 256 feet long but we only needed three stories. Trying to find a piece of real estate where you don’t have to use all of the air rights, which is a key factor for a lot of the real estate decisions in New York, was extremely challenging. We looked at a number of options for building residential units on top of parts of the building.”

After four or five years of looking around, they acquired the 126th Street site from the New York City Economic Development Corporation. In 2015, construction began on the four treatment room facility, comprising three gantries and a fixed beam room.
1(current)
2
3
4