Is AI a match for manual interpretation of breast density? 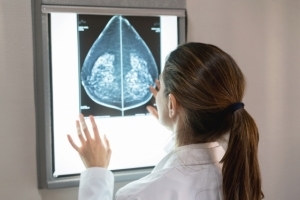 Breast imagers and AI experts at Massachusetts General Hospital (MGH) and Massachusetts Institute of Technology (MIT) have devised a new approach for automatically measuring breast density in an attempt to overcome the subjective discrepancies found in manual interpretations by different clinicians, and are using it at MGH in what marks the first example of a deep-learning mechanism of its kind to be implemented in clinical practice on real patients.

The presence of dense breast tissue can mask tumors, preventing mammograms from detecting them and raising the risk of false negatives. Supplemental screening options, such as breast MR and ultrasound, though effective, may not be reimbursable and require expensive, out-of-pocket costs for patients.

Utilizing tens of thousands of high-quality, digital mammograms from MGH, researchers trained and tested the algorithm prior to implementing it in routine clinical practice. Eight radiologists then reviewed 10,763 findings determined by the model to be either dense or non-dense tissue, agreeing with its distinctions for 10,149 mammograms, the amount of which made up 94 percent of its total assessments.

Rejection of the other six percent, however, does not necessarily mean the algorithm was wrong when taking into consideration reader variability among radiologists. Barzilay says the next step is to develop technology that can predict future risks from images and combine those findings with those on breast density.

"While density correlates with risk, it doesn't on its own determine who is gonna get breast cancer," she said. "We are currently working on the algorithms that can predict future risk directly from images."

The researchers attribute the availability of high-quality, annotated data evaluations by radiologists and the collaborative efforts of experienced medical and computer science professionals as the key to the model’s success in clinical practice.

Approximately 16,000 images have been processed by the system since its implementation in January.

The study was published this month in the journal, Radiology.