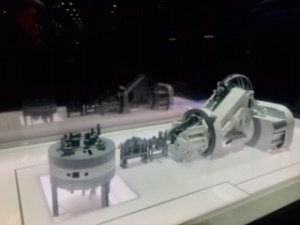 ProBeam 360° cuts irradiation time of the ProBeam platform by 75 percent and offers a 30 percent smaller footprint than its predecessor, reducing vault construction costs by approximately 25 percent. Use of the system is expected to open access to potential next-generation treatments such as flash therapy, the focus of Varian’s new research group, the FlashForward Consortium.

“The average irradiation on a current ProBeam System is 45 seconds to 60 seconds. In your overall day, that’s not a huge chunk. But we’re able to reduce it by 75 percent, bringing a lot of the moving tumor irradiations to under five seconds,” Jan Timmer, U.S. director of PT marketing at Varian, told HCB News. “For lung patients, you can do irradiation in one breath-hold. We think that will increase the use of protons in lungs and lung SBRT.”

Equipped with a 360-degree rotating gantry, ProBeam 360° is capable of providing Intensity Modulated Proton Therapy to patients, along with faster treatment times, by minimizing repositioning and re-imaging. High-quality cone-beam CT imaging is available from almost any angle, including iterative CBCT, which, combined with ProBeam 360°, enables adaptive precision radiation therapy to enhance the preciseness of treatment.

This preciseness is further enhanced by Varian’s high-definition pencil-beam scanning technology, which keeps dose within the contours of the tumor with minimal exposure to healthy tissue. In addition, the system utilizes RapidScan technology to deliver each field in a single breath-hold by a patient, simplifying motion management and increasing the number of patients who can comply with breath-hold treatments such as lung SBRT.

These capabilities, along with the accelerator of the system, are also being evaluated around the potential use of flash therapy, which uses high doses at ultra-high speeds in less than one second, and in one to three sessions. The treatment method may be able to eliminate tumors with almost no impact on healthy surrounding tissue.

Investigating the matter is the FlashForward Consortium, a group focused on preclinical research, clinical implementation and advocacy efforts around flash therapy.

Together, members will help identify preclinical study design for understanding the therapy, develop and share protocols for a safe and quality clinical start for new users, and assist with regulatory and advocacy efforts.

“The real mission of the consortium is to help us advance that therapy into clinical use,” Bill Hansen, strategic initiatives director for Varian, told HCB News. “They’ll help with the preclinical work that we’re doing now which we will not only continue but expand in terms of the various preclinical tests that we’re doing with animals. We’ll prepare for the first clinical trials in humans, and the consortium will help us define what those clinical trials should be. We’ll probably pick one or two disease sites where we’ll start those trials.”

The dose rate for flash therapy must be at least 40 Gy per second or higher to begin to see the effect on healthy tissue.