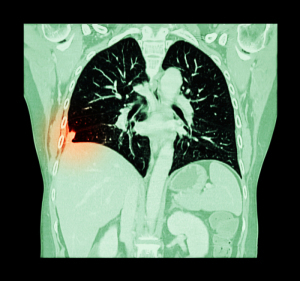 A European study and an American
study both support use of LDCT in
screening for lung cancer risk
The implementation of low-dose CT in lung cancer screenings may significantly reduce mortality among high-risk individuals, according to the findings of a 10-year Dutch-Belgian trial.

Presented last month at the International Association for the Study of Lung Cancer (IASLC) 19th World Conference on Lung Cancer (WCLC), the NELSON lung cancer screening trial argues on behalf of LDCT as a standard for assessing risk of lung cancer development, aligning with the findings of National Lung Screening Trial (NLST) conducted in the U.S.

“In screening, you’re not dealing with patients with lung cancer but people at risk for the disease,” Dr. James Mulshine, professor of internal medicine at Rush University in Chicago and chair of the Early Detection and Screening Committee of the IASLC, told HCB News. “In this pre-disease setting, we want to reduce the harm of medical radiation to as low as possible. In the last decade, the medical industry has shown it can produce extraordinary, high-quality imaging at very low dose so that the risk to this asymptomatic subject population is quite negligible. That’s why we specify low dose in this setting. We want to incur as little difficulty for these individuals as possible.”

A total of 1.6 million deaths occur each year due to lung cancer, with more than 60 percent diagnosed after the cancer has metastasized, leading to worse outcomes.

Started in 2002, the primary results of the NLST were released in 2011, revealing that annual exams with LDCT reduced lung cancer mortality among high-risk patients by 20 percent and overall mortality by 7 percent compared to controls.

The findings led the United States Preventative Services Task Force in 2013 to recommend LDCT as the standard for U.S. screenings of high-risk individuals, who are defined as those between 55 and 80 with a smoking history greater than or equal to 30 pack-years and who have not quit within the last 15 years.

Taking into account the findings of both trials, the IASLC Early Detection and Screening Committee affirmed its support of the use of LDCT for significantly reducing lung cancer mortality among high-risk individuals, prompting it to urge the adoption of screening programs that incorporate multidisciplinary groups of experts.
1(current)
2