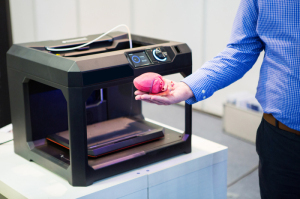 The tech giant is now capable of using triangular tessellation in 3D printing, an approach that breaks objects down into small triangles that approximate the shape of the original model.

Listed by Apple as the brainchild of Michael R. Sweet, the method enables the system to only move forward to make triangles, rather than back and forth, allowing it to speed up printing, according to TechCrunch.

The patent enables Apple to change the way in which the infill of 3D printed models is designed. The infill is composed of little patterns inside an object that help it remain rigid, with conventional ones made in a uniform fashion, leading to cracks or brittleness in the finished object.

Changing the shape of the internal infill into differently-sized triangles ensures that the edges of the object retain greater infill to prevent the onset of cracks.

The method will also be applied to the surface of the print for approximate smooth surfaces.

Apple's aim is to print models faster with fewer materials by enhancing 3D printed technology, the wider availability of which has made it a staple among many industries, particularly within medical imaging.

British surgeons at Guy’s and St. Thomas NHS Foundation Trust in London, for instance, recently performed a lifesaving kidney transplant for a two-year-old boy using a 3D-printed kidney, the form of which was based on CT scans of his father’s own kidney and the abdomen of the child.

And like Apple, researchers in the medical community are also striving to produce new methods that lessen time spent printing 3-D products, such as at MIT where scientists have formed a new method for converting differently-shaded pixels into a mix of black or white pixels with different densities from CT and MR data, allowing the 3D printer to use two different materials to make the model and preserve subtle detail.

"Our approach not only allows for high levels of detail to be preserved and printed into medical models, but it also saves a tremendous amount of time and money," said James Weaver, senior research scientist at the Wyss Institute and corresponding author of the paper. “Manually segmenting a CT scan of a healthy human foot, with all its internal bone structure, bone marrow, tendons, muscles, soft tissue, and skin, for example, can take more than 30 hours, even by a trained professional – we were able to do it in less than an hour."

Apple did not mention in what ways or areas it plans to utilize the method.

Apple declined a request for an interview.

Preparing O&P clinicians for the transition to 3D printing