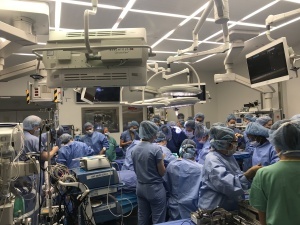 Over the summer, surgeons at NYU Langone Hospital performed the world’s first successful simultaneous face and double hand transplant. The medical team in New York was aided by technology from 3D printing company Materialise, which helped provide the surgeons with detailed insights and increased confidence before they set foot inside the operating room.

During the 14-month preparation for the surgery, Materialise engineers coordinated with the team, led by Dr. Eduardo Rodriguez, director of the Face Transplant Program at NYU Langone, on the development of a surgical plan and created an onscreen 3D model based on CT-scans. The surgeons used the 3D model to virtually select and position various plates and screws to predict the optimal fit for Joe DiMeo, a 22-year-old New Jersey resident who had suffered third-degree burns on 80 percent of his body in a 2018 car accident.

Materialise also printed surgical guides to ensure that bone fragments were properly repositioned based on DiMeo’s anatomy. While the surgery took 23 hours, the surgical guides helped reduce the overall surgery time, which NYU officials say was actually shorter than its most recent face-only transplant, performed in 2018.

The Materialise engineers and NYU Langone surgeons conducted numerous rehearsals of the operation in a cadaver lab. This helped the team prepare for the last-minute surgery, after a donor was located in August of last year, 10 months after DiMeo was listed as an organ donation candidate, said Emily Jones, a clinical engineer at Materialise who worked on the case.

“When we got to the day of the transplant, we already knew what the guides were going to look like,” Jones told HCB News.

A challenge came in creating the surgical guides for the donor quickly after they were found. The tools were produced 24 hours after the donor was identified and scanned.

“Once we got the CT scan of the donor, we translated it very quickly,” Jones said.

The COVID-19 pandemic also added to the complexity of the case.

Once the donor was identified, Jones and her colleagues needed to book a last-minute flight to New York, and there weren’t as many flights available as there are normally. They also didn’t end up attending some of the later labs, though that turned out to be a positive thing.

“It helped the surgeons internalize the different steps they had to do on their own,” Jones said. “It forced them to really master the guides ahead of time.”

The transplant was the latest success to come from NYU Langone and Materialise’s long-term relationship.

“These are the kinds of cases that play to our mission statement of a better and healthier world,” Bryan Crutchfield, the vice president and general manager, of Materialise, told HCB News.

Crutchfield noted that these cases have helped raise the company’s profile and open up opportunities to help other patients.

“As we get recognized for having participated in this high-profile case, people ask us about personalized medicine,” Crutchfield said. “It helps us get the word out.”