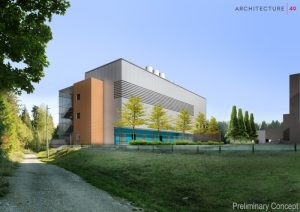 Rendering of IAMI
(Photo credit: Architecture49)
The Canadian government has pledged to invest in funding for the construction of an advanced medical isotope research and development center that will comprise certified infrastructure for isotope production.

Announced by Prime Minister Justin Trudeau at Canada’s particle accelerator center, TRIUMF, the public investment, along with contributions by project partners BC Cancer Foundation and the University of British Columbia, will provide a total of $31.8 million for the architectural setup of the Institute for Advanced Medical Isotopes (IAMI), designed to expand Canada’s position in the nuclear medicine market.

“The IAMI facility will be a nexus for multidisciplinary expertise from research and industry and will contain both a state-of-the-art, high-capacity TR-24 cyclotron and modern radiopharmaceutical production laboratories,” Dr. Paul Schaffer, associate laboratory director of TRIUMF's Life Sciences Division, told HCB News. “Its location at TRIUMF will enable unfettered access to some of the unique isotopes that can only be produced using TRIUMF’s high-energy particle accelerator infrastructure, including isotopes such as actinium-225 (225Ac), that are seeing dramatically increasing global demand.”

The IAMI project is expected to total more than $50 million with the addition of equipment and philanthropic funding, leading to an integrated set of labs and a TR-24 medical cyclotron, one of the most technologically advanced commercial cyclotrons in the world, housed within the finished facility.

Included in its offerings are next-generation cancer therapies for improving Canadian health outcomes and opening up access to radionuclide therapy markets, accelerated global drug development for early-stage trials with infrastructure for radiotracer production, a training platform for young researchers, and certified infrastructure for isotope production to aid industry partners in developing new diagnostic and therapeutic substances.

The institute will also secure a local supply of several important medical isotopes, including technetium-99m (Tc-99m), the shortage of which has set off a crisis within the nuclear medicine community, leading to delays in necessary exams for patients. The availability of the radioisotope is expected to further be strained in the first half of November due to the simultaneous shutdowns of Australia’s OPAL reactor and South Africa’s NTP Radioisotopes facility.
1(current)
2