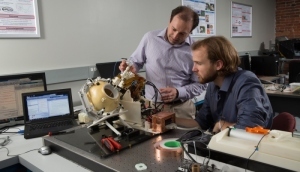 Designs for the solution call for it to operate within the scanner, where it will probe the brain in a minimally-invasive fashion to locate and eliminate masses using high-intensity therapeutic ultrasound under live, real-time MR guidance. Providing technology support for the project are the universities’ corporate partners, GE Global Research and Acoustic MedSystems.

"In interactions with neurosurgery colleagues, it was determined that using robotic assistance for stereotactic neurosurgery interventions would have some great benefit over manual frame-based approaches and over frame-less units based on tracking systems," Greg Fischer, associate professor of mechanical engineering and robotics engineering at WPI and director of the Automation and Interventional Medicine Laboratory, told HCB News. "Further, the use of interactively updated MRI imaging during the procedure can help account for deformation (such as brain shift) that occurs during the surgical procedure and is not addressed with traditional approaches."

We will also ensure that we are maximizing the odds that we are removing the entire tumor, while minimizing the chances of damaging non-malignant tissue.”

About 170,000 new cases of brain metastases are diagnosed annually in North America, making them one of the most common types of brain tumors. Current treatments include chemotherapy, radiation and surgery, all of which are limited in success and risk harming unaffected brain tissue. Surgery is further challenged by the fact that tumors must be present in accessible locations.

Utilizing a thin 2 mm probe, the system will drill a small hole in the skull. It will then place the probe within the tumor, adjusting the device’s orientation and power output to deliver doses of high-intensity ultrasound energy to heat and eradicate the tumors, while keeping damage to surrounding brain tissue at a minimum. The MR scanner will be able to detect the thermal emissions and use them to monitor dose delivery.

The robotic system itself will be developed by WPI’s research team, with Acoustic MedSystems designing, building and validating the needle-based therapeutic ultrasound probe, as well as software for visualizing and controlling it. The system will position and align the probe before insertion and adjust its depth and rotate it during the procedure to conform to the shape of the tumor, targeting the mass based on real-time MR scans to account for shifting of the brain during surgical preparation.
1(current)
2