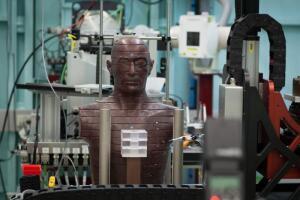 Simulating positioning with a test
mannequin Image courtesy of ANSTO
Cancer treatment with just a single radiation session took a step closer to reality, thanks to new Australian research.

“Our study was focused on understanding what dose of MRT could be safely given without harming the recipient,” lead researcher and Royal Women’s Hospital radiation therapist Lloyd Smyth noted in an Australian Nuclear Science and Technology Organisation (ANSTO) report of the research, adding that the study found that safe doses could be “remarkably high, and at least 10 to 20 times as high as doses usually considered safe in the clinic today.”

The toxicities of MRT and high dose-rate synchrotron broad-beam radiation therapy (SBBR) were compared in mice to conventional radiation therapy (CRT) in a study that used the ANSTO Synchrotron’s Imaging and Medical beamline, Smyth and colleagues at the Royal Women’s Hospital, RMIT University and University of Melbourne reported in Nature Scientific Reports.

The findings were stunning. “The healthy cells in-between the radiation beams are tolerating the treatment and recovering quickly, while tumors lose their structure and die,” Smyth explained to the Sydney Morning Herald.

“We’re eliciting completely different biological responses – it’s a different paradigm to what we have ever seen in the last 100 years of radiation therapy.”

The findings highlighted the need to gather tissue response data for MRT. “There is a lack of systematic dose-escalation data across a broad range of organs,” the researchers stated in the journal, adding, “currently, there is no published toxicity data for total body, abdominal or thoracic irradiation using MRT. Robust toxicity data for SBBR is similarly lacking.”

Beyond the high level of safe doses using MRT, other key findings, said researchers, included that there was no clear evidence of a normal tissue sparing effect using an SBBR dose-rate of 37 to 41 Gy units; the valley MRT dose was a better predictor for acute toxicity versus the peak dose; and there was a long-term detrimental effect of MRT on growth, despite the acute tolerance of irradiation.

The research “has the potential to dramatically improve radiotherapy treatment for cancer patients,” synchrotron scientist Dr. Daniel Hausermann noted in the ANSTO report.

“We all know someone who has been through radiotherapy to treat cancer and we know how hard that can be, both physiologically, and also emotionally as the treatments stretch out over time,” he noted, adding that the work could “dramatically” improve outcomes and “has the potential to avoid the side effects that come with radiation therapy.”

The next step, said researchers, is to move up to canines for further testing. If those studies are also positive, human trials could be next, especially including those with recurring brain, head or neck cancer – or even advanced breast cancer, they suggested.

A review of MRT, which appeared in Physica Medica in 2015, noted that research at that time was “currently only possible at few centers in the world, with mainly the Australian Synchrotron in Melbourne and the ESRF in France having active programs for developing clinical applications.”