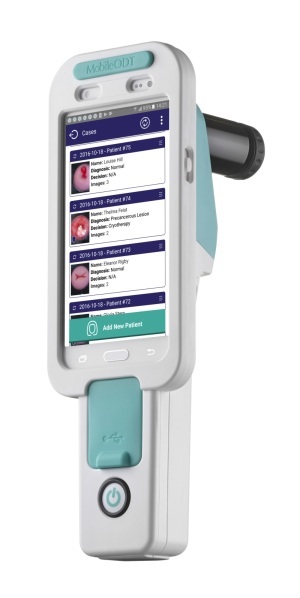 EVA System
MobileODT is rolling out its Enhanced Visual Assessment (EVA) System in what it's calling the first large-scale pilot program to examine the use of augmented intelligence (AI) for cervical cancer screenings.

Partnering with Apollo Hospitals and distributor Genworks, the women’s health imaging enterprise will conduct the study in India, where it will deploy its FDA-cleared, smart mobile colposcope for use in assessing women who lack access to lifesaving cervical exams.

“The AVE algorithm that will be reviewed in the pilot with Apollo Hospital in India was found to be more than 90 percent effective at detecting cancer,” MobileODT’s Yael Misrahi, head of global partnerships, and sales marketing manager Sara Vehling told HCB News. “The traditional, gold-standard Pap smear is only 68 percent effective. AVE also outperformed expert human examination.”

More than 432 million women in India risk developing cervical cancer. Only 3.1 percent, however, receive screening due to lack of available equipment and qualified colposcopists, and poor socioeconomic conditions. Of those positively diagnosed following HPV testing or a Pap smear, up to 80 percent do not seek treatment, despite it being a highly treatable form of cancer when detected early.

Currently used in 29 countries and more than 50 U.S. health systems, the EVA System enables non-experts to screen women for cervical cancer at the point of care.

The clinician inserts a speculum to open the walls of the vagina and then photographs the cervix using the EVA System colposcope. The AI application then loads the image into the EVA System which applies augmented intelligence to identify any areas that indicate the possible presence of cancer or precancerous findings. If such results do appear, further examination and any necessary biopsy can then be performed.

In addition, the system offers cost-savings to medical systems by enabling physicians to perform entire procedures in-house and bill accordingly. Routine pap smears and follow-ups amount to $6.6 billion annually in the U.S. alone, largely due to the cost of administering the Pap, and challenges associated with the test. Though the country houses less than one percent of the global volume of cervical cancer cases, more than 4,000 women die there each year from the disease. The total productivity loss from such mortalities was estimated at $1.3 billion in 2000.

A previous pilot at six Apollo Hospital Centers found the system to be able to detect cervical cancer in almost three times as many women compared to a pap smear.

The current study, which will take place at Apollo Hospital Centres throughout India, is expected to improve the performance of the algorithm in detecting cervical cancer by drawing comparisons between it and cytologic contesting, with biopsies performed to validate findings, and up to 250 women screened each day. This makes it the first wide-scale assessment of the algorithm’s efficiency, according to Ariel Beery, CEO of MobileODT.

“Imagine finding out that you have cancer and also finding out that your cancer can be immediately treated,” he told HCB News. “Beyond the socioeconomic benefits of getting this treatment, there is also a huge psychological benefit that you don’t have to worry for weeks between getting tested, biopsied, and then treated. That’s why AVE is so important.”

The EVA system is the only colposcope currently on the market with the capacity to run the AVE test.

The project was coordinated by Apollo Research and Innovations (ARI), the research division of Apollo Hospitals Group.