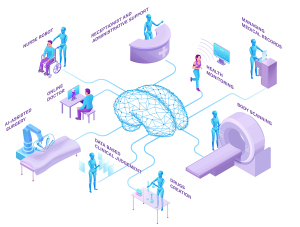 Held on January 9, the meeting of the organization’s 22-person board of directors oversaw the appointment of a series of executive officers and a layout of the group’s objectives in promoting applications of AI in healthcare.

"It is essential that its developers have a strong advocate providing a proactive and effective voice to underscore and explain the technology’s challenges, benefits and risks. A clear unified definition of challenges and strategies to address these is critical," Annastasiah Mudiwa Mhaka, acting president of AAIH, told HCB News. "AAIH formed as a proactive unified advocacy member organisation to address key challenges while driving growth, adoption, investment and integration of AI in healthcare industry."

The organization is designed to act as a forum in which members can convene active dialogue around industry wide issues pertaining to AI by unifying and identifying key priorities and bottlenecks to address strategically and collectively rather than individually.

Appointees at the meeting were John Baldoni, former senior vice president at GSK as chair; Brandon Allgood, co-founder and chief technology officer of Numerate, as vice chair; Angeli Moeller, co-leader of AI and head of IT business partnering research at Bayer as treasurer; and Naheed Kurji, president and CEO of Cyclica as Secretary.

The board also named six standing committees to oversee the work of AAIH. They include Education and Accreditation, Federal Engagement and Regulatory Affairs, Investment and Commercialization, Communications, Technology and Standards Development, and Industry Performance and Data Analytics.

Together, the AAIH board and its committees plan to develop a series of strategies and initiative over the coming months to educate the public about the benefits and risks of AI, as well as promote investments in research and development. It plans to work with government officials in the U.S., EU and other areas to develop regulatory and technical standards.

"AAIH will engage with regulators, policy makers, and investors to communicate key ideas and educate on the state of the industry to ensure well thought and appropriate strategies and guidelines," said Mhaka. "It will work with regulatory bodies on crafting dynamic regulatory frameworks, as well as on the generation and acceptance of standards for product development, and will establish a framework to support data infrastructure for robust, transparent and ethical use to accelerate translation, commercialization & adoption of AI/ML."