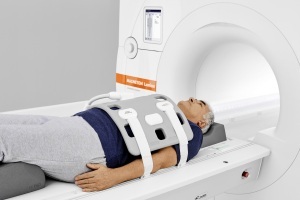 “It’s really about providing an access point for some of our customers to read Tesla and some of the state-of-the-art applications at an entry point with regard to cost, to maximize their return on investment,” Wesley Gilson, 3T MR product manager for Siemens Healthineers USA, told HCB News. “It doesn’t have the highest grade performance compared to our MAGNETOM Vida, BioMatrix systems, but it does offer the BioMatrix and DOT technologies and RF architecture for an MR system at a price point that is attractive to a certain part of our customer base.”

The system consists of Tim 4G and eight DOT engines from head to toe, for highly reproducible scans that are standard deliverable on it. These include a brain Dot engine, a Large Joint Dot engine and a Spine Dot engine among others.

Its accelerated workflow is evident in the timing of its exams compared to those on conventional MR systems, with users, for instance, able to perform a whole spinal scan up to 20 percent faster. New Turbo Site acceleration packages further reduce time for routine musculoskeletal procedures on various parts of the body by up to 50 percent.

MAGNETOM Lumina 3 Tesla MR is, in many respects, similar to MAGNETOM Vida, which gained FDA clearance in 2017, but lacks the latter’s Compressed Sensing GRASP-VIBE and Compressed Sensing Cardiac Cine. This, however, makes it a more cost-efficient resource that can provide quality findings for institutions that may not have the funds to afford highly advanced MR systems.

“We actually see a broad opportunity for the MAGNETOM Lumina, particularly for imaging centers and outpatient centers where there’s a lot of routine imaging being done, and where throughput is a major driving force,” said Gilson. “The MAGNETOM Lumina offers all of the advanced workflow applications that we have. We see that imaging centers and outpatient centers, as well as some small hospitals, might find that this is an ideal system for them.”