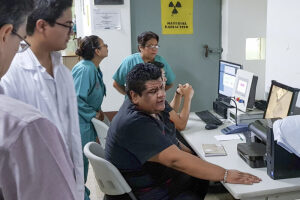 The outreach effort, funded in part through a U.S. international program, will measurably improve outcomes for the quarter of the Guatemalan population who receive care at a public cancer center.

"The equipment currently being removed was state-of-the-art in the 1970s and 1980s," Dr. William Powderly, the J. William Campbell Professor of Medicine and the Larry J. Shapiro Director of the Institute of Public Health, and director of IPH’s Global Health Center told HCB News. “When the new equipment is up and running, these underserved patients will be able to get care as good as patients in the U.S.”

The unit is being installed at the Liga Nacional Contra el Cancer/Instituto Nacional de Cancerologia (LIGA/NCAN) in Guatemala City. The facility is the country’s only comprehensive cancer treatment center for the poor and underserved. Once the new Halcyon radiotherapy system is operational the center could treat four times as many patients, according to Powderly. Survival outcomes are also expected to be much improved.

Powderly said the project was made possible by leveraging existing relationships. WUSL fosters interdisciplinary initiatives between its medical, global health and other academic areas to develop international medical capacity. The goal is to help underserved countries find solutions to their healthcare delivery needs to avoid exclusive dependency upon the West.

"When dealing with resource-poor countries you cannot come in with a colonial attitude," said Powderly. "You have to work with the professionals in those countries to find the capacity to serve people. This is a really good example of a successful public-private partnership.”

He also explained that there is a tradition in the West of donating older medical equipment, but it sits in a corner because no one has been trained to operate it or repair the equipment when it breaks. An essential part of the LIGA/NCAN project is that the Guatemalan staff will visit St. Louis to be trained on the same Varian equipment operating on the WUSL campus.

The project also will provide crucial global health training for radiology, public health and other students/residents at WUSL.

The grant was provided through the United States Agency for International Development (USAID)/American Schools and Hospitals Abroad. LIGA/INCAN is also contributing with a custom-built area to house the new machine. The U.S. National Nuclear Security Administration is making an in-kind donation by disposing of the hazardous material from the old machine, which is a critical part of the project’s success. BJC HealthCare, the health system that includes Barnes-Jewish Hospital on the Washington University Medical Campus, is also donating equipment to the project.