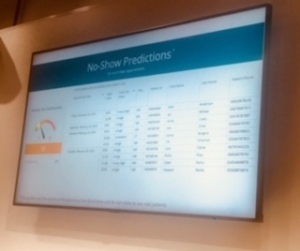 GE Healthcare is developing an algorithm
for predicting the occurrence of no-shows
to reduce their interruptions on workflow
GE Healthcare kicked off the 25th European Congress of Radiology this week in Vienna with the unveiling of two new algorithms for addressing the respective issues of no-show appointments and the detection of pneumothoraces.

Designed with the use of GE’s Edison platform, the two future works-in-progress are expected to act as time-saving tools that will enhance the workflows and prioritization of cases and tasks for providers.

The first, developed in collaboration with Swiss hospital Kantonsspital Aarau, is known as “the no-show algorithm” for its ability to predict the probability of a patient’s absence at the time of their scheduled appointment. The tool bases its decision on a wide range of indicators, including age, gender, the point of time in which the appointment was supposed to take place, and weather among other factors, as well as prior no-shows.

“If you have a certain number of patients for MR exams and a bunch of them are not showing up, that’s a tremendous amount of money lost because those slots cannot be utilized,” said Dietmar Seifriedsberger, VP-chief commercial officer for Central Europe, Eastern Europe and Russia CIS at GE Healthcare Digital, told HCB News. “If you have in your history a no-show already, then the chances for a second no-show are about 50 percent.”

Testing the algorithm, the hospital and GE found that Saturdays, especially Saturday mornings, held high rates for no-shows, and that many cases involved patients between the ages of 20 and 30. Good weather was also found to increase the chances of no-shows.

In response, a number of solutions were proposed for reducing the hospital’s no-shows. These included the use of texts and calls to patients, and arrangement of transportation for those who were elderly.

“We managed to reduce the no-show rate from 5 percent down to 1.5 percent. The impact at this particular site was half a million,” said Seifriedsberger. “It’s tremendous.”

In addition to no-shows, the company is also applying AI in the detection of serious conditions in various parts of the body, including for the identification of a pneumothorax, a disease that can range from mild to life threatening in its severity.

The healthcare tech giant is currently working on an algorithm that can analyze large numbers of chest X-rays and detect the presence of this condition. It then rearranges worklists by placing the most critical cases at the top so that radiologists can address them immediately.

“If you sit in front of your diagnostic workstation and do your diagnosis and create your report, all the critical cases are automatically populated to the top of your worklist,” said Seifriedsberger. “The algorithm also tells you how certain it is that there is an issue in this case.”

The development of both algorithms falls in line with GE Healthcare’s new partnership with the European Society of Radiology, which aims to propel the development and eventual commercialization of AI for medical imaging providers.

“There’s a lot of hype around AI but there are not a lot of tangible algorithms and products out there,” said Seifriedsberger. “This is why we have agreed on incorporating and making it tangible on the one end for the end-users, and on the other, for ourselves. How can we industrialize and commercialize these things?”

The two algorithms are now works-in-development and are not yet available for commercial sales.