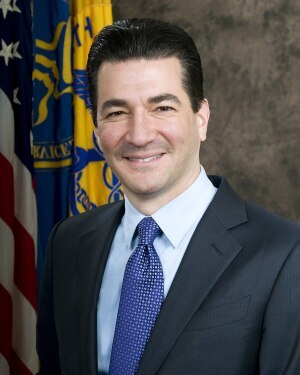 Scott Gottlieb courtesy of FDA
In the midst of his fight against teen vaping, which he attacked as “epidemic,” U.S. Food and Drug Administration (FDA) Commissioner Scott Gottlieb has resigned after less than two years at the helm.

In a letter, addressed to Secretary of Health and Human Services Alex M. Azar, he resigned, effective in one month.

Gottlieb leaves in the midst of the teen vaping battle and the opioid crises.

He noted what he considered to be a number of FDA achievements during his tenure, including new policies “to reduce the morbidity associated with tobacco use; to confront teen use of e-cigarettes; to decrease the rate of new opioid addiction; to improve access to affordable generic drugs; to modernize the development process for novel medical technologies like gene therapy and targeted medicines; to implement measures to improve food safety and our ability to identify and track outbreaks of foodborne illness; and to reduce the burden of chronic disease through better information and diets.”

He noted that “a record number of generic medicines, novel drugs, and novel devices” had been approved in 2017 – and that FDA beat that record in 2018. He stressed that FDA “set in motion a historic modernization” of both the Office of New Drugs and of the Office of the Commissioner.

Beyond that, new pathways for novel devices were created, including “modernizations of the 510(k) process,” he said. These would let device makers use the less demanding practice of comparing a new device to older ones on the market if they can show that it's “at least as safe and effective" as one that was already approved, according to numerous reports, including by HCB News in December, 2018.

"What we want to do is constantly push the market toward incorporating better technology and better capabilities by advancing the predicates and always looking forward so the ... predicates the device companies are using as the basis of their approvals are constantly incorporating newer and better technology to make the devices better and safer," Gottlieb said in an interview at the time with CNBC's Becky Quick.

He also highlighted the FDA's enforcement arm, which confronted “bad actors that put Americans at risk.” The agency “cracked down on bogus stem cell therapies, on sham homeopathy, on unsafe medical device products, on tobacco sales to minors, on unsafe dietary supplements, and on kratom.”
1(current)
2
3